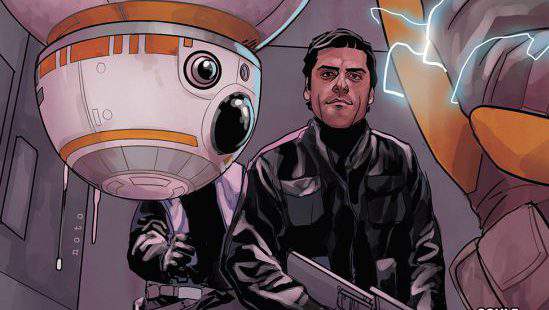 If you checked out my review for the previous two issues of Poe Dameron you’ll know two things. One, Poe Dameron is my favorite character from The Force Awakens and I loved Oscar Issac in the role. Two, I wasn’t that big of a fan of the fifth issue and found the ending and issue as a whole, weak. I was worried the story was running out of steam and they couldn’t do anything interesting. I’m sorry I ever doubted Charles Soule, because this issue is Star Wars at its best.

This issue puts Black Squadron in the middle of a full-scale prison riot on Megalox Beta. The squadron is attempting to break out Grakkus the Hutt in order to recieve information they need in the search for Lor San Tekka (Max von Sydow in TFA). In typical slimy Hutt fashion, Grakkus has offered the same deal to Agent Terex of the First Order. Obviously this puts the two groups at odds with each other and it’s a race to break the Hutt out.

So what works? Well in short, pretty much everything.

What I love so much about this particular issue is the “Ahhhh” moment where you realize what they’ve planned from the beginning. Every single person and droid played a role in the plan and once it’s clear, it’s perfect. BB-8, everyone’s favorite soccer ball droid, plays a huge role in the plan. Proving that you can be adorable and kick ass at the same time, taking down a droid five times his size.

The Black Squadron is simultaneously in the middle of a prison riot and escape. It’s an eclectic and insane situation to be in and it’s a lot of fun to see unfold. The more I see from each member of the group, the more I like. Each member has a lot of personality and they all work very well together. They have the appearance of  a rag-tag group of “A-holes” a la Guardians of the Galaxy, but they’re the best in the galaxy.

Agent Terex once again shines. He’s so effortlessly evil, in a prototypical Bond villain way. He’s the perfect foe for the Resistance and Poe. I legitimately enjoy seeing him fail. He cheats, uses, and betrays and embodies everything the First Order is. In short, he’s what you want in an antagonist.

Let’s talk about Poe Dameron. I said in the last review that Soule understands Poe, and that certainly continues. Every single line of Poe’s dialogue is so in character and so Poe. There’s a particular scene near the end of the escape that shows you exactly who Poe is as his core. He’s a great pilot and a hero, and this proves why I enjoy the character so much.

Phil Noto, as expected, keeps the art colorful and beautiful. There’s so much character in the art alone that you could easily just get lost in the pictures themselves. 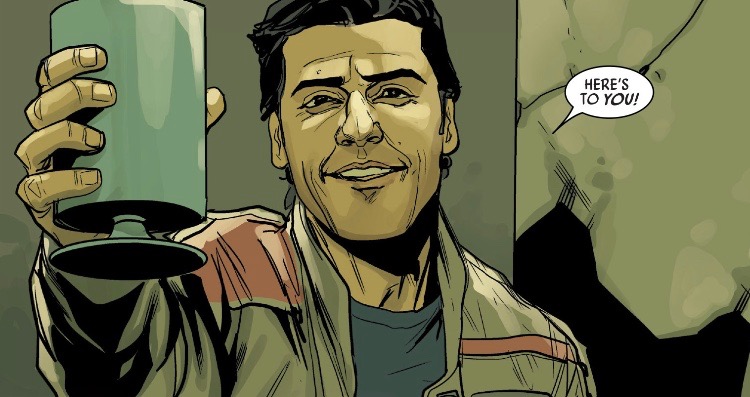 Finally, the story concludes with a bit of a mixed bag. First, there’s obviously resolution with the prison, but there’s also huge questions lingering. There may be a mole in the team and everyone is a suspect. It gets me extremely excited for what’s to come.

So this may sound a little weird, but hear me out — I usually like to listen to music while I read. Generally, for Star Wars comics, I’ll listen to one of the movie soundtracks. I was listening to Sabotage by the Beastie Boys, for some weird reason it worked really well. Try it for yourself, I enjoyed the story a little more because of it.

Poe Dameron #6 is the definitive issue of this run of comics, with a daring and fun prison escape and space battle. Bursting with an eclectic energy and fast paced action, picking this one up is a no-brainer.