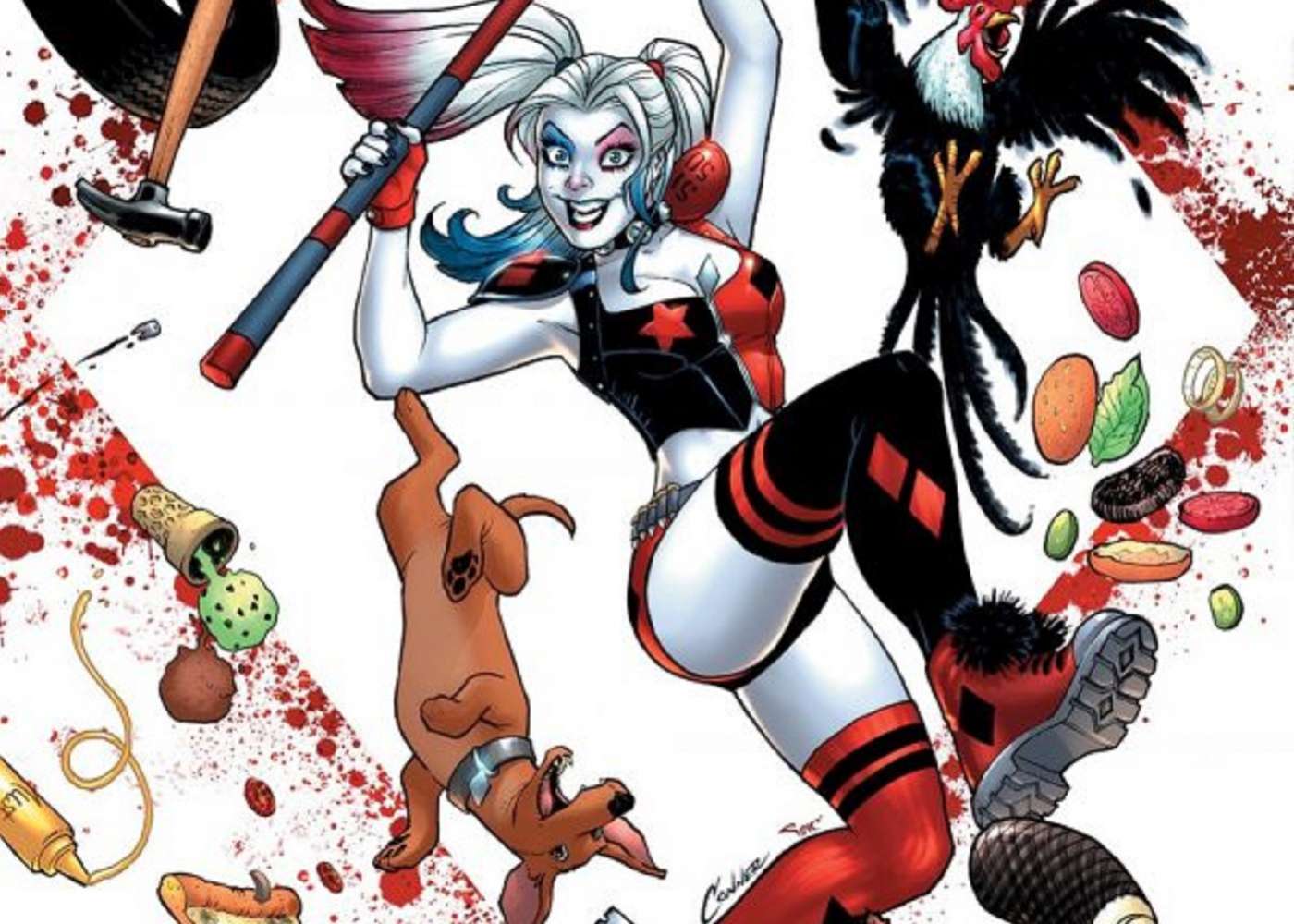 Harley Quinn Day is the anniversary of the first ever appearance of DC Comics fans’ favourite lady clown, Harley Quinn.

Twenty-five years ago, a zany lady doctor strolled onto TV screens. She loved a psychotic clown, knew how to wield a giant hammer, and won the hearts of DC Comics fans around the world. And we’re celebrating Harley Quinn Day with a look back at the highlights of Harley’s first quarter-century.

Let’s start all the way back the beginning, on the very first Harley Quinn Day.

Paul Dini and Bruce Timm’s Batman: The Animated Series remains one of the most beloved Batman adaptations made. It brought us one of the most iconic Mr. Freeze stories, Kevin Conroy and Mark Hamill’s fan-favorite takes on Batman and the Joker… but one of its most lasting contributions to Batman lore is the time the writers said “Hey, let’s give the Joker a girlfriend for an episode.”

In The Joker’s Favor, considered one of the series’ top episodes, an average man makes the rash choice to curse out a driver who cut him off, only to learn the other driver was the Joker. Joker agrees to spare his life in exchange for a favor, to be called in whenever he feels like it.

And when he finally calls in his favor, by his side is a clown-themed lady named Harley Quinn, later known as Harleen Quinzel, voiced by Arleen Sorkin. Sorkin’s iconic take on the character no doubt helped inspire Dini and Timm to keep her around.

Next: Harley’s other great love

In the 1993 episode Harley and Ivy, Harley and Joker end up on a break from each other after a failed diamond heist. Harley, determined to prove she’s every bit as good a crook as her puddin’, re-attempts the heist, only to run into Poison Ivy. The two hit it off, and embark on their own crime spree. At the episode’s end, Harley is hoping to get back together with Mr. J, to Ivy’s annoyance, but it wouldn’t be their last adventure together.

Fans fell hard for Harley and Ivy as friends, colleagues, and maybe something more, often preferring Harley and Ivy as a couple to the far less healthy Harley and Joker. In 2015, Harley’s current writers confirmed that the pairing, and Harley’s bisexuality, were now canonical, stating that Harley and Ivy are girlfriends, but not monogamous.

Frankly, they are an adorable pair, and there is just way more mutual respect than Harley’s ever going to get from the Joker.

Next: Harley gets an origin 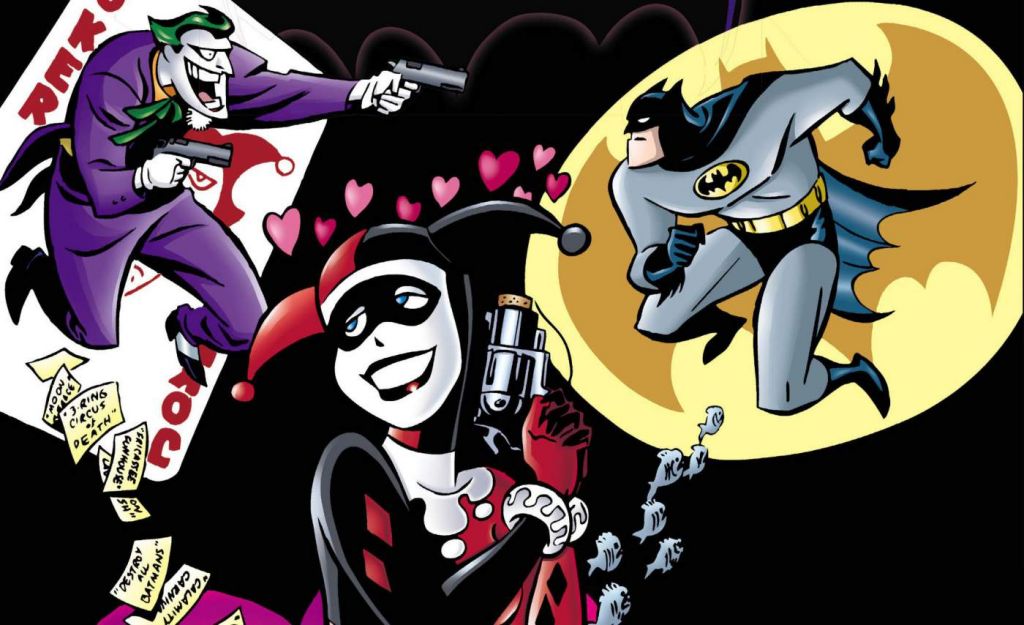 With Harley clearly a breakout character, two years after her introduction Paul Dini decided it was high time Harley got an origin story. And so came the graphic novel The Batman Adventures: Mad Love. Harley attempted to prove herself to her puddin’ (Again. She never has to prove herself to Ivy, just saying) by using one of his rejected death traps to kill the Batman. While doing this, she also reminisces about her past as psychiatrist Harleen Quinzel, and how the Joker won her heart while she was attempting to treat him.

Mad Love was a special issue of the tie-in comic to the animated series, which allowed them to get away with a few things that a 1990s Saturday morning cartoon show couldn’t. Examples? Harley in lingerie, trying to seduce her boss by asking if he wants to “rev up his Harley.” Implications that Harley slept her way to better grades. Or Joker beating Harley and knocking her out of a window because her nearly-successful death trap needed too much explaining to be funny.

By 1999, the landscape must have changed, because The New Batman Adventures (a later version of Batman: The Animated Series) adapted Mad Love into an episode, keeping the story largely intact. Even the lingerie, “Rev up your Harley” and all.

Cartoons changed a lot in the 90s.

Next: Harley comes to the comics 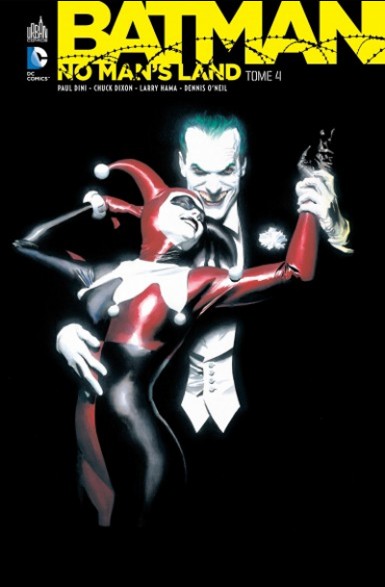 Seven years after her debut, DC Comics decided it was time Harley became part of their flagship enterprise, joining comic continuity. This came at a slightly awkward time for the Bat-books, however, as the entire Batman line was involved in a year-long crossover called No Man’s Land. Following a catastrophic earthquake in Gotham City, the US government decided they’d about had it with Gotham, and cut off the city from the rest of the country. Batman and the GCPD fought a block-by-block battle to retake the city from the criminals that had seized large chunks of it.

And, in the story’s final act, Harley Quinn was introduced as the Joker made his play for the ruins of Gotham.

The one-shot mostly retold the story of Mad Love, giving Harley’s origins and devotion to the Joker. Only this time in the continuity of the comics, not the animated series.

Somewhat redundant, but it did its job. Harley followed in the footsteps of Jimmy Olsen and fellow Batman: The Animated Series character Renee Montoya in making the jump from other media into the main comics. 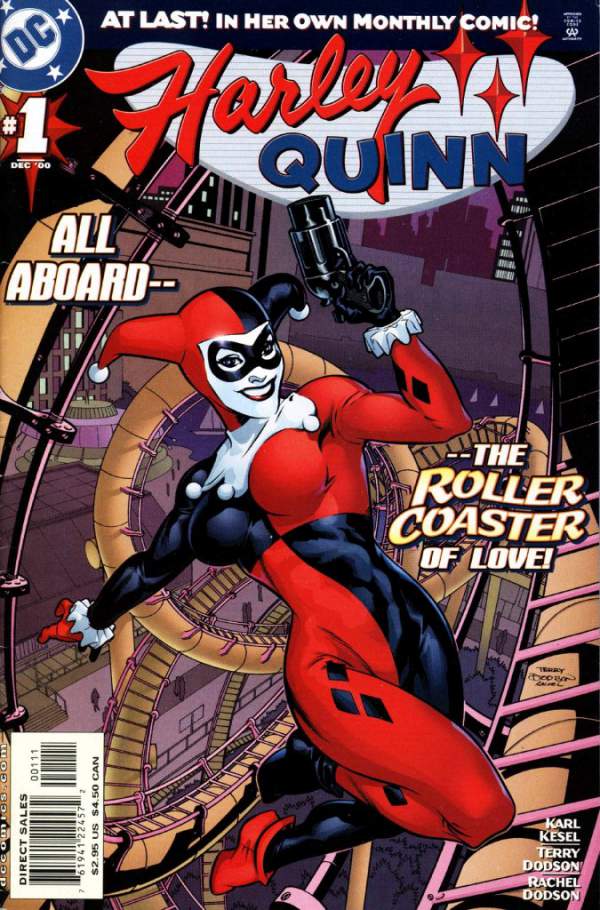 In 2001, DC decided it was high time Harley had her own book. Initially written by Karl Kesel with art from Terry and Rachel Dodson, Harley Quinn swung out on her own, leaving Joker and Gotham behind to move to Metropolis with some help from Poison Ivy.

The book lasted just over three years, meaning it started before and ended after Harley’s first live action incarnation. Which was…

Next: Harley’s first foray into live action goes… not great.

It 2002, the WB network (one of the two networks that would later merge to form the CW) tried to build on the success of Smallville with Birds of Prey. Loosely based on the popular comics team, Birds of Prey featured Barbara Gordon/Oracle (the former Batgirl), Helena Kyle/Huntress (based on her original incarnation, the daughter of Batman and Catwoman), and a young psychic/telepath named Dinah (named after but in no way resembling Black Canary) protecting Gotham from meta-human threats. Many of those meta-human threats were being orchestrated by one Dr. Harleen Quinzel, played by Mia Sara (or, in the unaired pilot, Sherilyn Fenn). Helena’s court-ordered therapist, Harly was out to avenge her beloved Joker’s defeat by Batman.

Whether or not you consider WB’s superhero flagship Smallville to be as on the same level as the CW’s Arrow, its follow-up Birds of Prey was no Flash. It started strong, ratings-wise, but bled viewers every week, fast enough that the network never expanded on its initial order of 13 episodes. The last episode featured Dr. Quinzel finally going full Harley Quinn for a full assault on the Birds’ headquarters. Set to “All the Things She Said” by t.A.T.u. because, well, youth-driven network in 2002.

Next: Harley and the girls

In the same year that orginal voice actor Arleen Sorkin played Harley for the last time in the video game Batman: Arkham Asylum, DC Comics decided to take the Harley/Ivy partnership to the next level by giving them their own book, and also adding Catwoman, why not.

As part of the Batman Reborn relaunch following Bruce Wayne’s apparent death, Harley, Ivy, and Catwoman formed a sort of anti-hero Charlie’s Angels, with a reformed Riddler as their Bosley. The series only lasted two years, ending when the entire DC Comics product line relaunched in the wake of Flashpoint. Gotham City Sirens left enough of an impression that Suicide Squad director David Ayer wants to make a movie based on it.

In the wake of Flashpoint, Harley found a new place in the New 52: as a member of Task Force X, aka the Suicide Squad.

As part of the New 52 reboot, Harley received a significant makeover. Her new, more skimpy outfit drew some criticism (not enough for DC to change it in the last six years). More notably, her rebooted origin added something to her character. Once she’d fallen in love with the Joker, he demanded she prove her love by falling into the same vat of chemicals that made him… him. As a result, Harley, who used to wear make-up, now has the same bleached skin as her puddin’.

Harley’s been a key member of the Squad ever since, but she’s too big a character to be contained there. Observe…

Next: Flying solo once again

By 2013, Harley Quinn was too popular to be just a part of a team book, and so writers Jimmy Palmiotti and Amanda Conner launched her second solo title. And they received a gift that few, if any, other DC books did: Harley Quinn is free to ignore larger DC continuity.

In the larger DCU, Harley might be a perpetual member of the Suicide Squad, but in her solo book, Harley has been rehabilitated and released from Arkham Asylum and has come home to Brooklyn, New York, where she buys a property in Coney Island that houses a freak show and a wax museum of famous criminals. She’s made friends, joined an underground roller derby league, and picked up a few would-be paramours. None of her suitors have yet eclipsed Ivy in her eyes, as Palmiotti and Conner are the writers that made that official.

Harley has even become a sort-of protector of Brooklyn, battling criminals, a corrupt mayor, an alien-induced zombie outbreak, and gentrification. To help with this, she’s recruited her own band of followers, her Gang of Harleys.

Harley’s current solo book is popular enough to lead to a spin-off, Harley Quinn’s Little Black Book, in which she teams up with various DC heroes.

She’s still a little crazy, if the stuffed beaver carcass she regularly converses with tells us anything, but she means well. Really she does.

Next: On the silver screen

Just a month shy of the 24th Harley Quinn Day, Harley finally reached the big screen as part of the Suicide Squad movie. While the movie wasn’t a critical success, a few elements did resonate with fans. Most notably: Will Smith’s Deadshot, and Margot Robbie’s portrayal of Harley Quinn.

Robbie certainly struck a chord with executives at Warner Bros, because they’re eager to bring her back wherever they can. Rumors of a Harley/Joker movie are probably just rumors, but Robbie’s Harley will be back for Suicide Squad 2 and David Ayer’s Gotham City Sirens.

So happy Harley Quinn Day, puddins. From a proposed one-time character on Batman: The Animated Series to multiple comic titles and a potentially bright future in film. Twenty-five years young, Harley’s just getting revved up.

That was probably inappropriate given the Mad Love “Rev up your Harley” jokes but it does fit here.