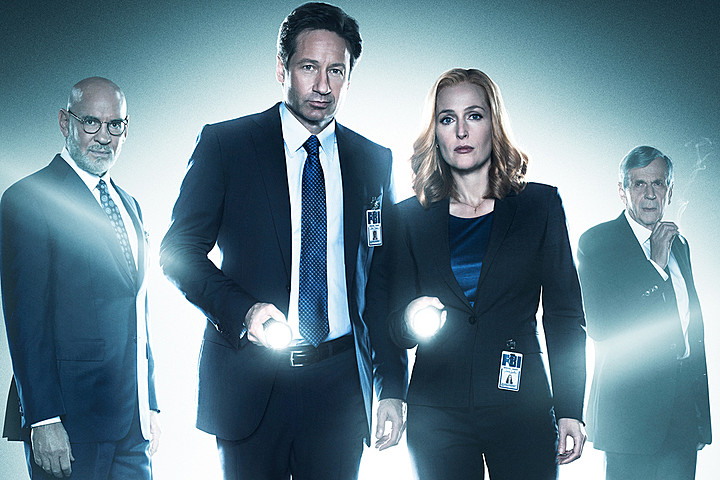 David Duchovny wished X-Files co-star Gillian Anderson a happy birthday today with a tweet that seems to confirm (or at least strongly hint) fans can expect to see agents Dana Scully and Fox Mulder on the small screen again sometime in the near future.

Happy Birthday, Gillian. If you see Dana, tell her Fox says she might wanna polish up the ol’ badge soon-ish. Love, D

The tweet seems to be in direct reference to Fox CEO Dana Walden’s address to the Television Critics Association on Monday where she confirmed the network was in “significant talks” with series creator Chris Carter and, of course, co-stars Anderson and Duchovny.

During the meeting, Walden said Fox not only wants to make certain the series continues for at least one more season, but this time around it might expand from six episodes to somewhere between eight and 10.

Maybe, in season 11, Mulder will finally get the climactic contact he’s always wanted with his “little green men,” (though, as we now know, there is a far larger human element involved than he once believed). Also, Hopefully Scully (not to give too much away if you haven’t seen season 10) will get a quick reprieve.

For 23 years now, X-Files fans have been familiar with the show’s motto “The Truth is Out There.” However, finding out whether the sci-fi series will return for another short installment like Season 10, which featured six episodes as opposed to the series’ former average of 24, has been a bit of an ongoing mystery. Thankfully, for fans at least, Fox indicated that some actual progress has been made toward securing a Season 11. Not only that, but the execs want to see a longer run this time.

For the past few months, nailing down any confirmation of an 11th season has been like participating in a ping-pong match between Fox and the cast. In May, Fox CEO Dana Walden told reporters the network was in talks with X–Files creator Chris Carter, as well as series leads David Duchovny (Fox Mulder) and Gillian Anderson (Dana Scully). However, in June, Anderson told Deadline she had yet to be approached by Fox.

According to SlashFilm, Fox is now in “significant talks” with the cast and creator of The X-Files. Walden announced to the Television Critics Association the network would “love to do another season.” She says the only thing that has hindered the process has been scheduling issues.

“Gillian lives in the U.K. David lives in New York and California and we do the show in Vancouver. Chris lives up north, so it’s just trying to coordinate a time when they all could carve out a period to be in Vancouver.”

Walden also says she hopes they can expand the next season’s run from six to eight to 10 episodes. However, that will be something that is up to whether the cast is willing to spend more time on the series. Anderson has already stated she is up for giving X-Files the proper closure, but she has her limits.

“In my head, at least, was the fantasy of maybe doing three movies. I don’t know where that came from, but it was a shame the second was handled in the way it was. We know we wanted to continue the conversation and try and trump that experience. The truth is, in no way or shape am I built for a 24-episode season anymore.”

Will Anderson and the rest decide they at least have another eight to 10 episodes in them? Well, we know the truth is still out there, but if the last few months have been any indication, we might have to wait a while before this mystery is finally solved. At least Fox seems bent on making sure Mulder and Scully have at least one more run in their future. Let’s just hope Carter, Anderson and Duchovny can carve out some Canada time.