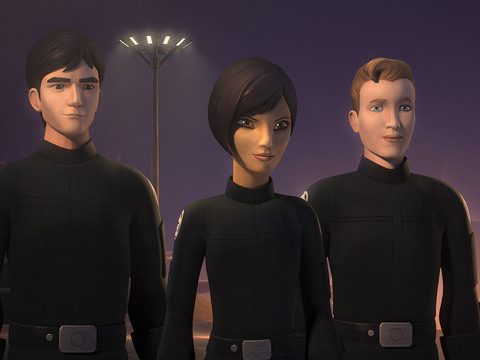 I’ve been a big fan of the new direction Rebels has been taking this season. It feels like they are really focusing on the characters and it’s been great so far. Part of my issues with the first two seasons was consistency. We would get incredible episodes like Siege of Lothal or Shroud of Darkness, only to be given a filler episode on space whales the next week. Thankfully, the space whales are no where to be found and season three has been consistent and this week is no exception.

“The Antilles Extraction” finally gives a backstory to a beloved original trilogy character, Wedge Antilles. The Rebels are in desperate need of pilots and an opportunity presents itself to recruit more into the Alliance. Fulcrum(more on this later) alerts the Ghost Crew that Imperial Cadet pilots are willing to defect. Sabine goes undercover and infiltrates the academy to get them out and into the Rebellion.

The introduction of Wedge is a lot of fun and it stayed true to the character. We know next to nothing about where he came from and how he came into the Rebellion. It finally gave us a backstory for a character that played such an integral role in both of the Death Stars’ destructions. It also made sense to the story. It’s easy to bring in a fan favorite, but often it can feel kind of tacked on and is often just a cameo. It felt natural, it felt real and it adds to the lore.

I throughly enjoyed Sabine in this episode. The show can often focus on the main Jedi characters of Kanan and Ezra and sometimes the other members can just be in the background. It was a cool way to explore her roots and she is slowly becoming one of my favorite characters. Being a former Imperial cadet, she knows how it all works and how a cadet would act. Once again this season is looking deeper into each character and it continues to pay off.

Villain time! Agent Kallus and Governor Pryce were great in this episode. Let’s start with Pryce. I’ve never found her to be a particularly good villain for the show, but she came back with a vengeance. Cold, calculated, and stereotypically Imperial. She is everything you hate about the Empire and when Sabine brings her down I may have jumped up in excitement a little bit. Kallus on the other hand has become increasingly conflicted, and likable.

There is a clear difference between Kallus from season one and Kallus of season three. If I didn’t know any better I would think that he is joining the Rebels.Either at the end of the season, or beyond. The best moment of this episode was Kallus helping Sabine and the defectors escape. The events from the season two episode The Honorable Ones, finally came full circle. Telling the defectors that now he and Zeb were even. I have a sneaking suspicion that Kallus is the new Fulcrum mentioned earlier. The distorted voice sounds remarkably similar to Kallus and his presence at the base can’t be a coincidence. Exciting things are continuing to happen in Rebels.

Once again where is Thrawn? I know, I know, it’s super nit picky, but I’m getting a bit irritated by his lack of screen time.

The Antilles Extraction isn’t quite as good as the previous two episodes. That being said it is a great solo outing for Sabine, and a great introduction to Wedge. I’m intrigued to see where Agent Kallus goes from here and what’s next for the series.

Rebels in it’s third season continues to impress.Fan favorite, Wedge Antilles is finally given a good origin story and Sabine continues to grow and mature as a character. With two great villains in Pryce and Kallus, as well as Kallus’ increasing change of heart, The Antilles Extraction keeps this season consistent.