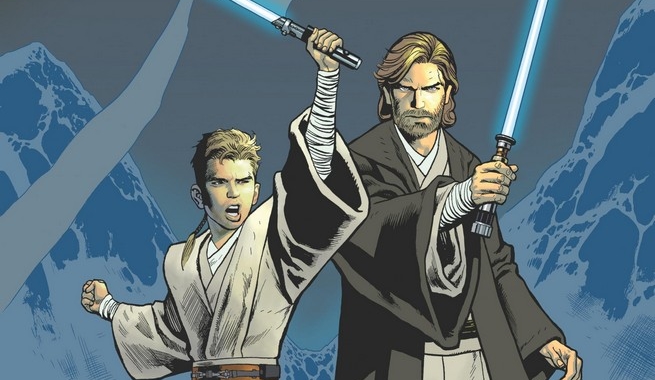 To the surprise of many die hard Star Wars fans, I am a pretty big fan of the prequels. I acknowledge that the movies themselves are obviously flawed, but I enjoy them for what they are and they bring something new to the universe. Some of my favorite canon stories have come from this era, both of The Clone Wars series come to mind as they really explored the war itself. There is plenty to delve into in this time period and I think we should get more from the canon and comics. Case and point Obi-Wan & Anakin.

Obi-Wan and Anakin takes place in the little explored period of time between The Phantom Menace and Attack of the Clones. When the Jedi Temple on Coruscant receive a distress call from Carnelion IV, a planet that has been ravaged by generations of war, they send Obi and Ani to answer the call. The pair both crash on the planet and are immediately caught in the conflict, with the comic itself telling the story of how they save the day.

There are two main aspects that this comic does incredibly well, the first being how it shows the relationship between Obi-Wan in Anakin. One of my biggest gripes that I have with the prequels is that we never truly saw the friendship that Obi-Wan told Luke about in A New Hope. Through their time together on Carnelian IV in this comic you see the beginnings of that friendship, and while it is a master-apprentice relationship, you can tell that the two care for each other a great deal. It is a stark comparison to what we see in Attack of the Clones where Anakin is kind of a whiny brat throughout the entire movie toward Obi-Wan. It’s great to see that relationship fully realised here.

Secondly, what is hands down the best parts of the story are the flashbacks to Courscant and seeing Anakin’s Jedi training. During these flashbacks we see Anakin’s incredible skill where he more than earns his title as “The Chosen One”. The training itself is just scratching the surface and we get some truly great interactions between Anakin and Palpatine. No spoilers, but the two journey through the depths of the underworld of Coruscant and you can see the seeds being planted for the eventual fall of Anakin.

The main story itself is interesting and action packed, but the two aspects above kind of overshadow it to the point where it feels like it was just a device to push things forward.

This specific run only had five issues which I picked up as one big collection and had a lot of fun with it. It makes me wish that they would continue to explore the Obi-Wan and Anakin dynamic, because this is some of my favorite content in all of the new canon. There is room to very easily explore even more of the adventures of Obi-Wan and Anakin. It’s not perfect, but I had so much fun with Obi-Wan and Anakin, it had a short run and can be read in about an hour or so. Pick it up, it’s well worth it.

Obi-Wan & Anakin is an excellent comic-book miniseries that explores the relationship between Obi-Wan and Anakin much better than the prequel movies did.