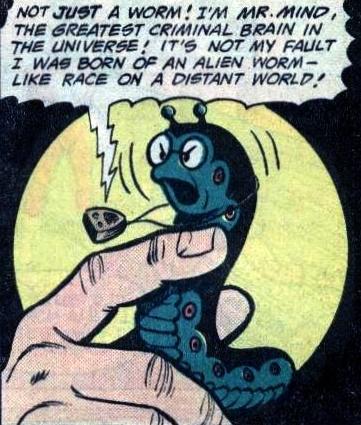 Mister Mind might not look like much. He’s just a caterpillar from Venus, after all. But don’t be fooled. He’s also a genius, incredibly devious… and has mind control powers. He can control nearly anyone. He’s a mind worm, and he’s very dangerous.

Mr. Mind is a unique challenge. Tiny, hard to find, and harder still to convince anyone is real. Perhaps it would take the mind of a child to accept that everything that’s happening is because of a tiny green worm from outer space.

And you might wonder… if he’s a caterpillar, does he go into a cocoon? And if so, what does he eventually turn into? Well… that is complicated, to say the least. Time travellers Rip Hunter and Booster Gold found out once, and it was not pretty.