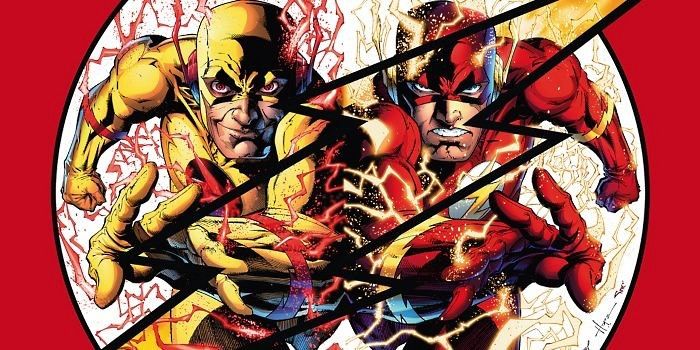 Are we getting a Flashpoint-esque storyline? That’s the question on everyone’s mind after The Flash’s stellar Season 2 finale. Fans are still talking about Barry’s (literally) Earth-changing final decision, but if you haven’t seen the episode yet, beware of spoilers below.

DC just relaunched its universe with the incredible Rebirth #1 (seriously, don’t skip to the last page), but after The Flash finale, the comics aren’t the only narratives audiences are expecting to see reset. Barry’s choice to return to the night of his mother’s death to save her and, possibly, kill the Reverse Flash, will certainly have a massive effect on the show’s third season. In the comic arc, the Justice League was torn apart by Flashpoint, Thomas Wayne witnessed the death of his son and became a murderous Batman, while Superman was turned into a government experiment.

Fans are speculating, in hopes, that the same fate will befall the Arrowverse, as we could potentially see a murderous Robert Queen (Arrow is basically Batman) donning the green hood. While viewers will tirelessly continue to orchestrate their own theories, the Flash and Arrow actors have added their own two bits about what they think Barry’s decision will entail.

I know absolutely nothing about where we’re going in season 3 yet and how we will pick it up after THAT decision. #TheFlash

I think we can all make some assumptions.. #TheFlash

The writers just began working on Season 3, so it’s no wonder Gustin is out of the loop, like the rest of us. We likely won’t get any concrete details, or teases even, until San Diego Comic-Con. But The Flash wasn’t the only one to address the coming changes, Green Arrow too voiced his opinion on the matter of Flashpoint and the rippling effects of Barry’s final act.

“I don’t know, I do know that we’ve done a lot of work on Arrow to introduce the other shows, for lack of a better term, and now that that’s all done, we’re focused on doing the things that we do well for Season 5,” Stephen Amell told Comicbook.com. “Arrow is at its best when we’re dealing with problems in Star City. We’re not a time-travel show, we’re not a multi-Earth show, though obviously [we do that] with crossovers and stuff like that. We’re Arrow, we deal with Star City, and I feel like we’ll be better off focusing on that.”

Yes, Arrow is best when grounded in reality, but the Arrowverse overall may be altered for the better if their respective arcs took a more unified approach. And that unification will probably be best represented in the already confirmed four-way crossover between Arrow, Flash, Legends, and Supergirl. Could that be where the Flashpoint-like storyline collides with the rest of the Arrowverse, if that is in fact what’s happening? Hopefully, then we’ll get a real sense of the Justice League being expertly crafted on The CW. Let us know your thoughts and theories in the comments below.