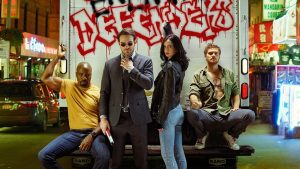 The initial reviews that surfaced online for this series were not entirely misplaced. Yet, it wasn’t that bad. I read some opinions describing it as “the worst Netflix show ever.” To those reviewers I ask: Did you watch Between?

I do believe this is the weakest of the Marvel/Neftlix shows, but by no means would I say it’s bad. What I think hurt it the most was its excellent predecessors and limiting budget. While I’m in no shape or form an Iron Fist savant, I’m aware of the fantastical elements the original comics brought. Fantastical elements that belong alongside Thor and Doctor Strange. People were expecting grittiness and kung-fu in a story that was mostly about a misplaced kid in the business empire with a fantastical martial arts undertone. Let’s hope Iron Fist will get his warranted spot in the limelight during Marvel’s The Defenders later this year.

I don’t fully disagree with all of the negative reviews, but I don’t fully agree with them either. This is the weakest Marvel TV series by far, and while it’s frustrating and confusing at times, it can also be enjoyable.