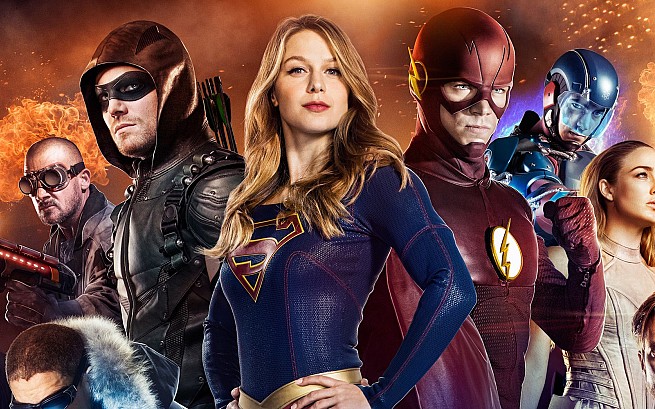 According to EW’s Spoiler Room, Greg Berlanti and Co. are just getting started on penning the 4-night crossover. It’ll be an unparalleled feat, never before seen on television, but how this will be achieved is a mystery. However, Berlanti did tease that what brings Supergirl, Flash, Arrow, and the Legends together will be a unified threat. “I’m going to probably try to have one unifying threat, as opposed to different things on different ones, which is what the first year was,” he revealed.

The first crossover was in The Flash’s first season. The Scarlett Speedster needed help with the Rainbow Raider, and Arrow’s episode saw Team Flash uniting with their Star City brethern to bring down Captain Boomerang. Of course, the second year of crossovers introduced fans to the Legends and set up their show’s villain, Vandal Savage. Now it seems the ante will be upped once more. We know Supergirl will be the connective tissue across those episodes, but the how and why is unknown.

Arrow will be facing off against the show’s version of Prometheus. The Flash will have two big bads — Doctor Alchemy and another Speedster. Legends of Tomorrow will see the Waverider crew battling the Legion of Doom. Supergirl’s Season 2 villain is… we don’t know. They won’t tell anyone! But we’re still betting it has something to do with the guy in the pod. Perhaps the Girl of Steel’s main antagonist poses such a threat that help is required from another Earth.

That leads us to more questions in need of answering. How exactly is Supergirl being brought into the Arrowverse proper? Will The Flash play a part in this conundrum, should we expect the crossover to bridge the multi-dimensional gap? Tell us your thoughts and theories in the comments below.

The Flash kicks off the next round of The CW shows on October 4. Next up is Arrow’s Season 5 premiere on October 5. Supergirl will follow the next Monday on October 10. And October 13 will see Legends of Tomorrow introduce the Justice Society of America.