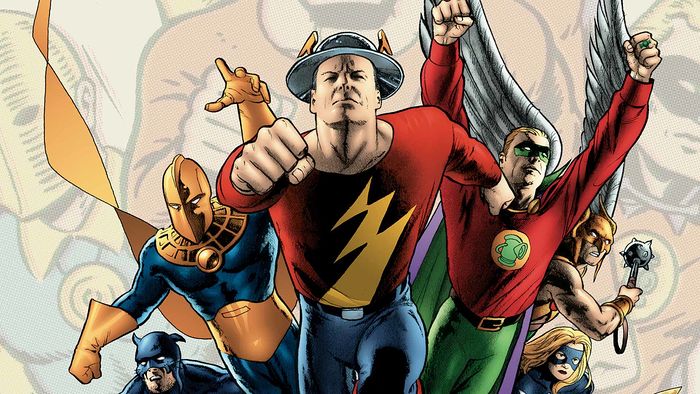 Legends of Tomorrow Season 1 ended with the promise of Justice Society of America’s impending arrival. So far, the show is making good on that promise. Along with Hourman, the following characters from the Golden Age crew are set to appear: Citizen Steel, Dr. Mid-Nite, Star Girl, and Obsidian. We’ve yet to see any of them in action or in costume, but Legends showrunner, Marc Guggenheim, did reveal the JSA logo on Twitter.

So THIS is happening. #LegendsOfTomorrowpic.twitter.com/348djucTfJ

It’s looking good, stylized and worthy of any and all attention. We’ll likely be getting our first glimpse of this in Season 2’s second episode entitled Justice Society of America. The logo especially embodies the era in which the JSA was founded. A considerable amount of time may be spent in the 1940s, meaning more excitement is in store for Palmer and Stein. It’ll be fascinating to see how the Justice Society gets along with Rip Hunter’s time-travelling band of misfits. Also interesting will be the team’s backstory: how they merged and what threat led them to form the JSA.

Since they’ll be teaming with the Legends, we know the confirmed villain(s), Legion of Doom, will be formidable. The supervillain group will have a slow reveal, as opposed to Vandal Savage’s introduction prior to Season 1.