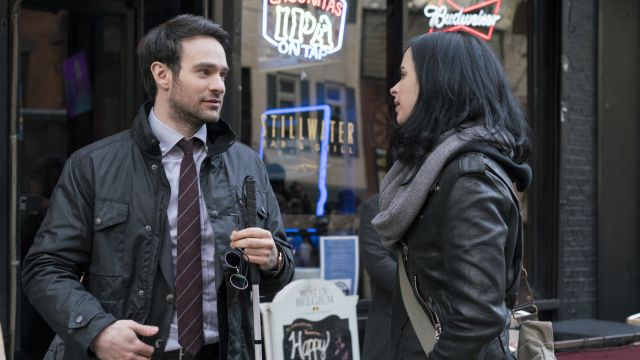 Beginning again with the classical music is subtle foreshadowing in this initial scene. Music and colors have been very telling throughout this series, and I enjoy this method of storytelling. That’s about all I liked about the beginning of this episode. My love for Captain America: Civil War is an indicator that I enjoy seeing heroes fight each other when there’s a good reason to do so. Daredevil, Jessica, and Luke’s triple-team against Iron Fist didn’t carry a good reason. And Danny getting upset about being sidelined shows little growth in a character that should embody zen. I did like that it’s Jessica who knocks him out.

Since his solo series I’ve hated Iron Fist’s dense attitude. However, in this episode, the reserved nature of Daredevil frustrated me just as much. They are divided but yolked together by circumstance, and there’s a parallel between our heroes and villains because of how disjointed their alliance is. Although, Luke Cage calling out Danny Rand’s stupidity for fighting his own team did give way for their friendship to kindle.

The reveal of the villains’ endgame should’ve been obvious, but for some reason I didn’t figure it out in time for the tremendous reveal at the end of this episode. Alexandra’s ominous speech by the end left me with a feeling of consternation. I know a lot of people will probably have an issue with this, but I actually liked this surprise. I wonder if we’ll get to see K’un-Lun…