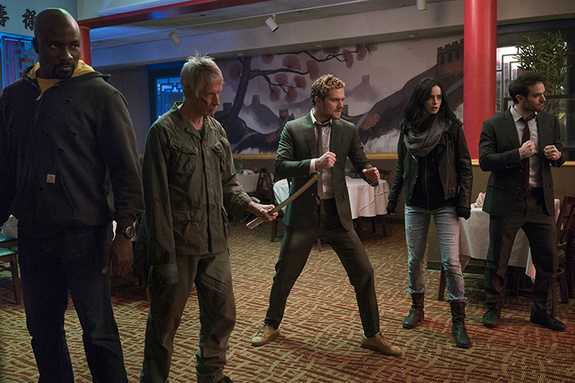 Jessica Jones being the one who convinces Matt Murdock to join the team was unexpected. Danny Rand realizing he can’t do stuff alone is the redemption arc I was waiting for during his solo outing. What I didn’t appreciate was Jessica bailing on them. We’re at the halfway point of the series, they should be a team by now.

While Alexandra’s many historical identities only show her fascination with the letter “A,” what I found interesting was her possible god-complex thanks to her immortality. She has a painting of Aphrodite in her apartment, and if Daredevil has taught me anything is that your taste in paintings say a lot about a person. Alexandra trying to convince the Immortal Iron Fist to join her was a noteworthy scene. Her presence is very demanding, but she never once raises her tone. Unlike all the other villains in these Netflix shows, I have no sympathy for her. While I do find her intriguing, I also dislike her demeanor.

I know I’ve raved about this for three episodes now, but the scenes in the Chinese restaurant had the perfect lighting. So far, the use of color is my favorite thing about this show. Also, I learned that throwing a car at the villain is the way to make an entrance. When Jessica said, “Who missed me?” I raised my hand.