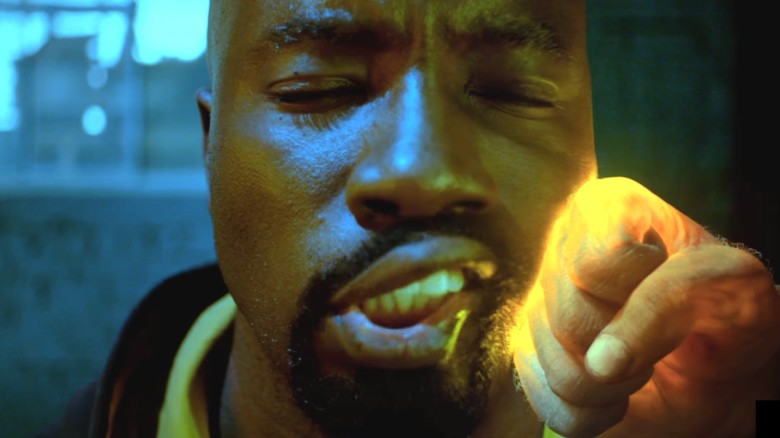 I didn’t realize the title sequence silhouettes are made up of a mapped New York. I guess I was too distracted by the pretty colors. I’m only two episodes in and I’ve already said too much about the use of color. Yet, I’m going to say more because this visual narrative is beautifully done. Interestingly, the lighting and prominent colors follow the five main characters alone. Jessica Jones meets Misty Knight (Simone Missick), but even though she’s a Luke Cage character, the color scheme stayed blue.

My Iron Fist frustrations resurfaced momentarily when Danny began carrying the world on his shoulders again. Colleen trying to talk him out of it bothered me even more, because I thought we were past this… Let’s hope this doesn’t continue for long throughout the series.

Am I the only one that gets excited when Carrie-Anne Moss’ Jeri Hogarth comes on screen? Her first appearance and interaction with Foggy Nelson brings joy to my heart. The psychological thriller that was Jessica Jones was my favorite season out of all the Netflix/Marvel shows, so Jeri’s concern for Jessica is a throwback to those stories. The same can be said about John Raymond’s (Alex Moggridge) involvement. Although short, it felt very much like Jones’ cases falling short, except this time Kilgrave had nothing to do with it — Elodie Yung’s Elektra is the culprit.

At this point in the show, it’s easy to see the threads are connecting all our characters together. I loved the “rivalry” between Danny and Luke when they first meet each other. Again, the color scheme shines, as you can see blending of yellow and green in the characters’ first interplay. The same goes for when Jessica and Matt Murdock meet; there’s a red door in the background of all the blueberry hues in the interrogation room.

From here I have two questions: I might’ve missed something because it’s been a while since Daredevil Season 2 came and went, but why are Karen Page (Deborah Ann Woll), Foggy and even Matt himself treating his Daredevil persona like a drug addiction? Also, Alexandra has Stick, the woman hasn’t really done anything, and yet I already fear her. Why do I fear her?!