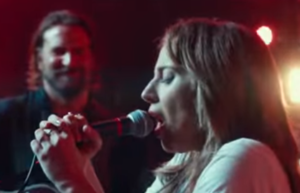 Toronto International Film Festival, otherwise known as the tiff, is arguably one of the biggest film festivals in the world. According to publications, this particular film event is second only to Cannes in terms of its influence and prestige. The festival’s People’s Choice Award is in fact an indicator of what could win the Oscars in any particular year. Slumdog Millionaire, 12 Years a Slave, American Beauty, The King’s Speech, and La La Land are just a few Oscar winning films that won the tiff choice award.

After the screening of the film, Cooper revealed details about the development of A Star is Born. According to the actor turned director, music was such a big part of the film. It was so instrumental that he treated it almost as a living character:

Cooper further explained that the production initially had a set of songs they wanted to incorporate in the movie. However, since he was working with such wonderful musicians, most songs were taken out in favor of those the production wrote themselves:

“We had an arsenal of songs at the top of the film, but we were writing songs during the filming. We were changing songs on the day. We performed three or four songs within a scene so that I would have it at my disposal in the editing room. And that’s because I was working with these incredible musicians” gushed Cooper.

With the success of A Star is Born, Cooper revealed that he wouldn’t be opposed to directing a film again. Cooper thinks the entire process was incredibly rewarding. He feels very lucky that people trusted him to be a the helm of a movie:

“If I have an opportunity… yeah, that’s all I’d like to do. I’ve never been more fulfilled than in this process. The hardest thing was knowing that all the people on this couch trusted me. The fact that they gave their blind trust to me was terrifying and motivating.”

Aside from Cooper, Lady Gaga aka Stefani Germanotta, the pop star turned actress who plays Ally in the movie, has also gushed about her involvement in A Star is Born. She declares that staring in the film has been one of the most life-changing things that happened in her life:

“He said to me: ‘You are an actress’ and I said to him ‘You are a musician.’ We made that exchange. I don’t know that I’ve ever had a closer artistic friendship with someone as I do with Bradley. This entire experience was life-changing. I have never had an artistic experience like this before.”

A Star is Born is scheduled to premiere across the United States on October 5, 2018.