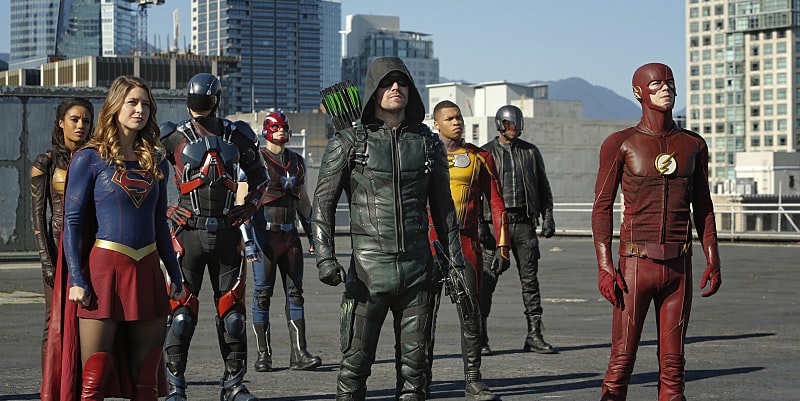 The Supergirl Twitter account has unleashed the following Invasion! promo, showing off new footage. Check it out below:

See Heroes v Aliens on the 4 night crossover event, starting with #Supergirl Monday at 8/7c on The CW! #DCWeek pic.twitter.com/LF1PLABA3p

The new footage gives us another close look at the Dominators. We also see more of Barry and Oliver’s bond, which is always fun to watch. Felicity and HR (still not used to that) also have a winning reaction to seeing Supergirl in action. Trick arrows, Heatwave being Heatwave, and a Heroes vs. Aliens battle rounds out the spectacle. However, nothing is more exciting than seeing Deathstroke and White Canary trade blows for the first time in three years. #DCWeek can’t arrive fast enough.

This promo is but one of the few The CW has released over the last several days. Barry introducing Supergirl to the rest of the Arrowverse was pretty amazing. Legends of Tomorrow’s part of the crossover received a found footage clip. In offering fans another reason to give Thanks, the network unleashed the first full-length trailer. Plus, we’ve been given a teaser of just how Barry and Cisco will interrupt the Danvers family Thanksgiving meal.

The crossover event is set to be packed full of excitement. Not only is Supergirl coming to Earth-1 for the first time, but all the heroes will share a screen together. Sure, it’s happened in the past, but the entire cast of The Flash, Arrow, and Legends have never been all in one place. Additionally, Arrow will hit its 100th episode milestone. This explains Deathstroke’s appearance, and many more familiar faces will guest star, as well.

Supergirl’s final moments this coming Monday will kick things off. The Flash will begin the Arrowverse crossover proper on Tuesday; Arrow’s 100th is set to continue the event. And, finally, Legends of Tomorrow will draw everything to a close on Thursday, December 1.