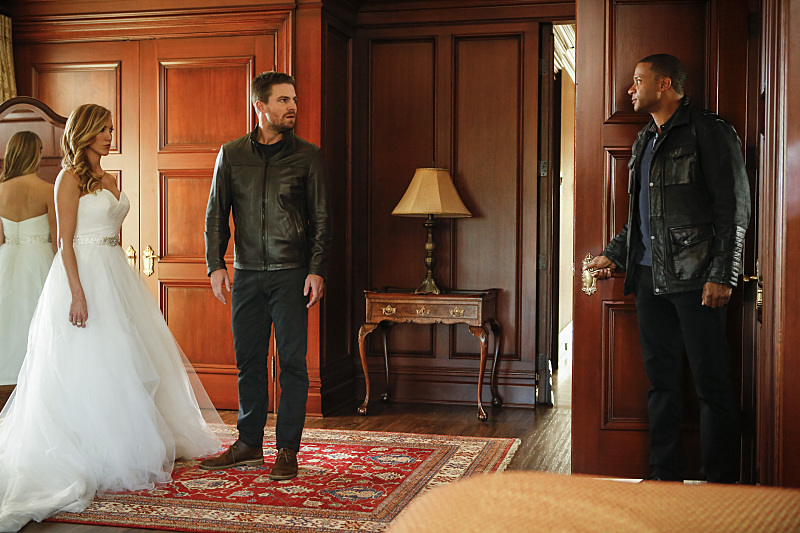 Arrow is taking the week off, presumably for Thanksgiving, so that leaves fans an extra week to brace for episode 100. As the recently released synopsis teased, a reunion of sorts is to be had during that time. Oliver will awake in a perfect world, preparing to marry Laurel with his friends and family surrounding him. Much like Batman: The Animated Series episode of the same nature, Perchance to Dream, his deceased parents will be alive and well.

The CW has released a set of images from the episode, all of which are reminiscent of Arrow season’s past.

It’s hard not to smile at seeing Ray and Felicity together again. Also touching is the embrace between Moira and Thea Queen, as we know their relationship was rocky on the fatal night of Moira’s brutal death. Sara, Diggle, and Oliver are also shown; here’s to hoping those three get more memorable fight sequences together. Perhaps what will be some of the episode’s more endearing moments are to include Laurel and Ollie’s interactions.

It’s clear the Dominators are working their mind-control on Oliver, hence the perfect world he envisions. What’s especially of note is that this probably is his idea of a perfect world. Is guilt making him dream of marrying Laurel, or is he remembering a time when these things were possible? The question is more than likely to be answered at some point.

However, one question is still in the air. Because this is obviously a dream sequence, where will Oliver’s body be located? Are the Dominators taking hostages aboard a ship? We’ll find out when Arrow’s episode of the Invasion crossover premieres Wednesday, November 30.

ARROW CELEBRATES 100 EPISODES; THE EPIC SUPERHERO CROSSOVER CONTINUES — Oliver (Stephen Amell) wakes up to a life where he never got on The Queen’s Gambit. Robert (guest star Jamey Sheridan) and Moira Queen (guest star Susanna Thompson) are alive and well. Laurel (guest star Katie Cassidy) is his loving fiancée and their wedding is imminent. Everything seems perfect, but Oliver starts to notice small imperfections that make him question this new reality. Meanwhile, Felicity (Emily Bett Rickards) and the recruits take on a new threat with help from The Flash (guest star Grant Gustin) and Supergirl (guest star Melissa Benoist). James Bamford directed the episode with story by Greg Berlanti and written by Marc Guggenheim & Wendy Mericle (#508).