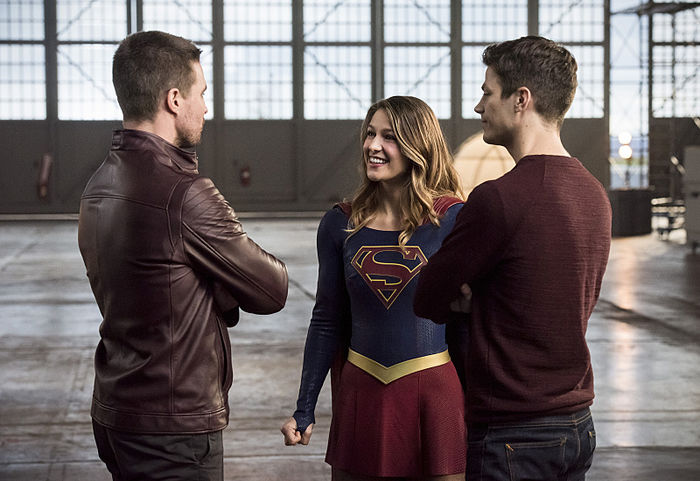 As if the hype couldn’t be anymore difficult to contain, The CW, in conjunction with EW, has released the following clip featuring Supergirl’s arrival on Earth-1.

That there folks is Barry introducing Kara, or “as she’s known on her Earth” Supergirl, to the rest of the crew. We only get a small taste here, but seeing the rest of the heroes react is pretty awesome. One half of Firestorm isn’t sold at first, but Diggle, of course, is instantly a believer. How will stoics like Oliver, Mick, and Sara handle the meeting? We cannot wait to find out.

During this week’s episode of Supergirl, the network aired the crossover event’s first teaser. In it, footage was featured from all parts — Supergirl, The Flash, Arrow, and Legends of Tomorrow. Thanks to all a set of synopses recently released, we also know a little more of what to expect from Invasion! However, there’s still plenty of unanswered questions. How will the Dominators motive be laid out for this iteration of the alien invasion? It will presumably have something to do with their concerns of Earth having too many powerful beings. This concern would work to explain their attack on Central City, since the Particle Accelerator Explosion made it a hotbed for superpowered beings.

Team Flash has dealt with difficult foes in the past. However, the aliens they encounter must be pretty formidable if they need to bring the Girl of Steel along. The clip clearly takes place in The Flash’s episode of the crossover. Therefore, this is only a tease of a tease of what’s to come. Most interesting will be how the different teams from each show will work together. Who’s taking point here? Oliver and Diggle, Barry, Sara, or Supergirl? In the comments below, tell us your thoughts and theories on what you think will go down.