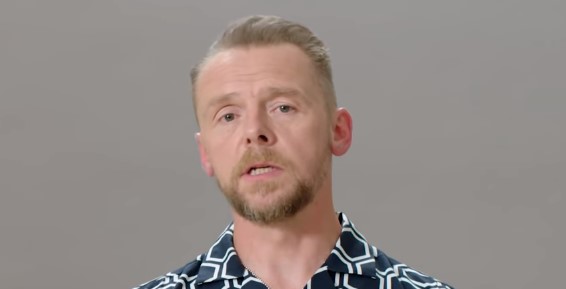 The recent New York Comic-Con spelled big news for The Boys’ fans. During the event, the cast and crew of the comic book adaptation, which was picked up and would be released by Amazon Studios, not only officially premiered the series trailer but also announced the inclusion of an A-lister in the series’ cast.

It was confirmed that Cornetto Trilogy’s Simon Pegg would be part of Amazon’s The Boys. The actor, who also played key roles in Star Trek and Mission: Impossible, would be playing the main character, Hughie’s, dad –  a character that wasn’t part of the original source material.

In the wake of the announcement, Simon Pegg sat down with Screenrant to reveal even more details about his role and what fans should expect from The Boys.

During the interview, Pegg explained that he was approached by the team behind the show to ask him to be part of it. After all, the main character was modeled after Pegg. It was then that the actor had the brilliant idea of playing Hughie’s dad:

“Whether or not they had already had the character in mind I’m not sure, because he certainly… he serves a real purpose in the show. He’s not in the comic book, but I think in the show he represents the possibility of Hughie not taking action. And the show begins with this terrible tragedy that happens to Hugie and he has two choices; he can stay on the sofa with Dad like every Campbell man has in the past, or he can actually change his life. And so, as a sort of visual representation of Hughie’s possible destiny, the Dad works really well as a character.”

With Hughie’s dad being introduced in the series, there is a question if a mom is also in the picture. Unfortunately, it seems like it is just Jack Quaid, the actor playing Hughie, and Pegg:

“No, she passed away, so it’s just Hughie and Dad, and they have a very sweet relationship. That picture that you saw of us, the family shot, is very much prior to A-Train doing what he does. They have a very sweet little… you know they are just father and son, and he’s still got his toys in his bedroom, and they live together, and Dad dotes on him. He’s a nice guy, he’s just very ineffectual.”

Aside from the reveal of a totally new character, Pegg was asked in the interview if there are more surprises in store from the franchise’s fans. Still being coy, he confirmed that the show would be a definite treat:

“Everything that I saw, I really really liked, and I appreciate the importance, when making an adaptation, of not being too slavish. You can tie yourself in knots by being desperate to please, and I think that the best thing you can do with a story that first appeared in 2008 sis to make sure that it feels relevant in 2018. So they’ve done everything they can to do that. So the changes that I saw felt completely in keeping with the spirit of the comic book.”Amazon’s The Boys would be premiering on Amazon early next year.