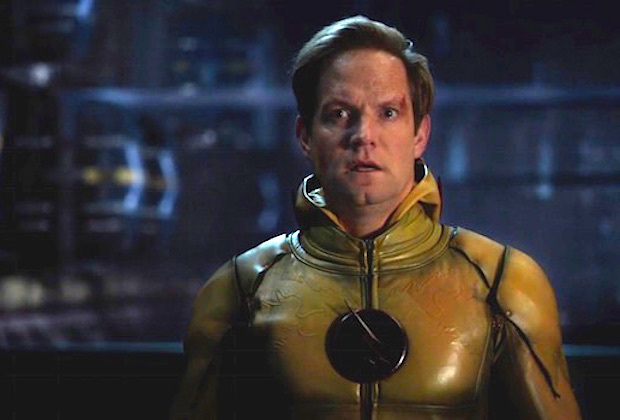 Legends of Tomorrow is set to premiere last in the roll out of Arrowverse shows this season. However, that doesn’t mean it can’t get a chance to shine now. Reverse Flash actor, Matt Letscher, took to Instagram to showcase and image featuring one-half of the Legion of Doom.

To the left we see Neal McDonough’s Damien Darhk and on his right is Letscher’s Eobard Thawne/Reverse Flash. The two appear to be on the Legends of Tomorrow set. Although, it seems they’re no longer in the 1940s setting previously teased to take up a bit of Season 2. This is evidenced by the sports car in the background of the duo’s menacing pose.

Of course, we have to take note of the missing Legion of Doom members. Malcolm Merlyn is no where to be found. It’s a wonder John Barrowman wasn’t poised for a villainous, yet hilarious, photobombing opportunity. It could be that at this juncture in the season, the Dark Archer has yet to hop aboard. Perhaps his on and off heroic streak will keep him in line for a while. But that’s incredibly doubtful. It’ll be interesting to see what eventually tips him over the edge. Surely, his joining a supervillain squad has nothing to do with wanting to protect his daughter, Thea. Or does it?

Also absent from the photo is Wentworth Miller’s Leonard Snart/Captain Cold. Miller was the first Arrowverse actor, followed by Barrowman and Katie Cassidy, to get the multi-series deal. With it, those three will appear across multiple shows. It’s likely Snart and Merlyn’s absence here could be in relation to those characters appearing elsewhere during the story arc in which this photo is relevant. However, Captain Cold’s heroic sacrifice at the end of Legends Season 1 does beg the question of how he’ll return. Will it be the result of Barry’s changing the timeline during The Flash Season 2 finale? Or is his come back, and return to villainy, due to the nature of Legends being a time-travelling show?

All of this and more will be answered once Season 2 kicks off on Thursday, October 13.