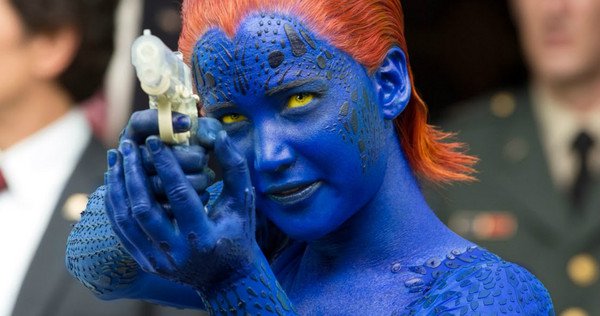 During the recent press tour for Titanic in space romance, Passengers, Jennifer Lawrence has once again distanced herself from the X-Men universe, whilst simultaneously joking that she’s not done with the character altogether. In an interview with MTV, alongside her Passengers co-star and Star-Lord himself, Chris Pratt, the former Katniss Everdeen suggested, albeit tongue-in-cheek, that she wanted to join The Guardians of the Galaxy.

When Lawrence was asked about a cameo in a future Guardians instalment, she said “I won’t be Mystique in the X-Men movies, but I would love to Mystique in Guardians of the Galaxy. I wonder if I could do that.”

It’s obviously a throw-away comment, meant as little more than a giggle from the perennially funny actress. The pertinent comment is the one about her no longer playing Raven in the X-Men universe. She appears to be done with the franchise. It’s hardly surprising considering the way in which Mystique evolved into her Hunger Games alter-ego during the misfire that was X-Men: Apocalypse. She went from morally ambiguous anti-hero, to rabble rousing, speech making leader of the mini-Mutants. The intrigue, and [pun intended] mystique surrounding her character was completely neutered in favour of a bland action hero.

This is not the first time Lawrence has cast doubt on her future in the role. She told MTV she was parting ways with all things Mutant, telling them “It is my last one, actually,” while on the red-carpet for Apocalypse.

With next year’s Logan signalling the final outing for Hugh Jackman as Wolverine, and the cycle of Michael Fassbender, James McAvoy, and Nicholas Hoult et al appearing to be at an end, it seems safe to assume that we can add Jennifer Lawrence to that list of graduating X-Men. Just don’t expect that to be into GOTG.