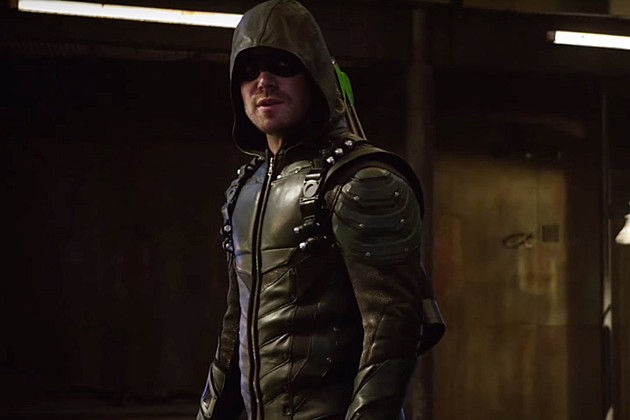 Arrow’s fourth season saw the hero battle with his inner darkness, some would say ad nauseam. Season 1 Oliver wasn’t afraid to lethally take down his targets. Later, the character’s arc in Seasons 2-4 explored his no kill tactics. However, the vigilante made a choice in this past season’s finale to kill Damien Darhk. It was somewhat driven by Merlyn’s advice of either doing what’s necessary or hanging up his hood. Season 5’s trailer shows Ollie accepting that decision, as he stands over Laurel’s grave finally admitting who he is at his core.

The show’s return will mark a new day for the series; it’s supposedly going back to the basics. In doing so, this year’s villain, Prometheus, is a direct result of Ollie’s past actions. When he returned home from Lian Yu, he set out on a mission to right the wrongs of his father and the city’s elite. Arrow, or the hood as he was referred to then, dropped bodies. Lots of them. Thus, Prometheus enters the fray, but he isn’t the only call back from the show’s early days. According to Stephen Amell (via Nerdophiles), the Green Arrow we see this time has gone back to his old ways.

“At the end of Season 4, we found a shade of gray, and Oliver is very much in that spot still. He says to Thea in the pilot,  he has to admit that Malcolm was right. That if he’s not willing to do whatever’s necessary, then he shouldn’t even be out there at all. And as a result, we have a shot in the pilot where I kill three people in one shot. And it’s because it is what it is — ‘you’re in my way, threatening my life, you gots to go’. I think that’s a more interesting character, because it’s more dynamic, there are more colors to it.”

So essentially, Oliver will become a killer again. However, to what extent remains to be seen. Does this mean he’ll train his new recruits to act lethally, if the need arises? We’ll have to wait and see. In addition, the lighter tone that fans were promised at the start of Season 3 seems to be on its way out already. Amell continues:

“I love the fact that Flash, Supergirl, and Legends can have their lighter moments, and I think it’s important to have that too. But, you know, Oliver is getting to that point he’s getting to be a grizzled veggie… he’s getting back to where we found him, a little bit.”

This could be the icing on the cake for the return to form fans have been anticipating. Arrow Season 5 will premiere on October 5.