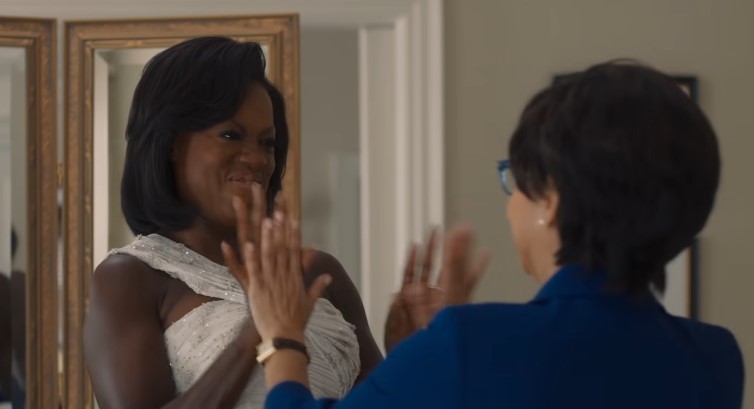 Viola Davis may be the ruthless Amanda Waller in The Suicide Squad, but she is ready to be right next to the president of the United States as Michelle Obama in Showtime’s upcoming series, The First Lady.

THE FIRST LADY is a revelatory reframing of American leadership, told through the lens of the women at the heart of the White House. In the East Wing of the White House, many of history’s most impactful and world-changing decisions have been hidden from view, made by America’s charismatic, complex and dynamic First Ladies. This series will peel back the curtain on the personal and political lives of three unique, enigmatic women, tracing their journeys to Washington through interweaving storylines with an enlightening intimacy, with season one focusing on Michelle Obama, Betty Ford and Eleanor Roosevelt.

Though Davis may be at the front of the marketing, the series actually focuses on three generations of powerful women who have taken the seat of First Lady. Besides Davis, the series also includes Michelle Pfeiffer as Betty Ford, and Gillian Anderson as Eleanor Roosevelt.

Even if the series is called The First Lady, we also shouldn’t forget that they all stood behind presidents, and the show has O-T Fagbenle as Barack Obama, Aaron Eckhart as Geral Ford, and Kiefer Sutherland as Franklin D. Roosevelt.

It’s not clear if the stories of the three ladies will be told simultaneously, but I can imagine that each would have a handful of episodes that would focus only on them. The first season will run for 10 episodes, and is created by Cathy Schulman and Susanne Bier.

The First Lady premieres on Showtime on April 17.