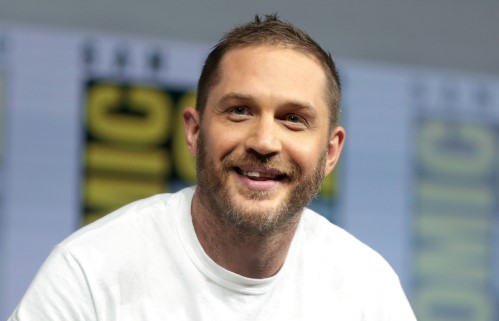 After years, even decades, in production hell, the film adaptation of Marvel’s Venom is mere days away from its premiere. As the debut approaches, more and more details about the movie have made their way to the news cycle. In fact, Venom himself aka Tom Hardy has commented on what fans should expect from their long-awaited project.

Tom Hardy recently sat down with MTV to promote Venom. During the interview as reported by Indie Wire, the actor commented on the PG-13 rating the movie has gotten. He explained that Venom as a character is flexible. He can be made into a character that children can watch or something super violent that is made just for adults:

“To be fair, the [‘Venom’ property] can fulcrum into R-Rated and fulcrum into youth or children. My littlest ones, they watch Spider-Man and Venom quite comfortably and Venom toys appear and LEGO appear. So it’s not like they’re scared by him, and at the same time there’s a lot in the real estate that you can actually imbue with a complete sense of gratuitous ultra-violence if you really wanted to, and I think you’ve got the right people for that job if you want to push it, ‘cause that’s where I’d love to go with it.”

Sony, the production behind the movie, intended for Venom to be PG-13. This way a Spider-Man/Venom crossover would be possible. Nevertheless, Hardy isn’t worried about a crossover. The actor thinks the character and the universe can standalone:

“If [we don’t crossover], we’re more than happy to stand alone,” Hardy said. “We have a Venom-verse and 900 characters to play with.”

The PG-13 rating came as a shock to a lot of plans. Most were expecting a very adult feature especially following the statements made by the movie’s director, Ruben Fleischer.

During this year’s San Diego Comic Con, Fleischer was asked about what fans can expect from his Venom. He explained that the production wanted to stay true to the source material. As such, moviegoers should expect a violent interpretation of the beloved Marvel character:

“That’s the plan. It is not the plan, that’s the movie. Our movie wants to honor the comics as close as we can tonally. In the comics, he bites people’s heads off and eats brains. It would be weird to make a movie with Venom if he wasn’t doing that. We tried to honor it as closely as possible. This is definitely a darker, more violent, more vicious Marvel character than I think anyone’s ever seen before.”

In the same interview, Fleischer assured fans that cast and crew of Venom successfully gave justice to the character:

Marvel’s Venom is scheduled to hit the big screens on October 5, 2018. Aside from Tom Hardy, the movie stars Michelle Williams, Riz Ahmed, Scott Haze, and Reid Scott. Jenny Slate and Woody Harrelson would also be making an appearance on the movie.