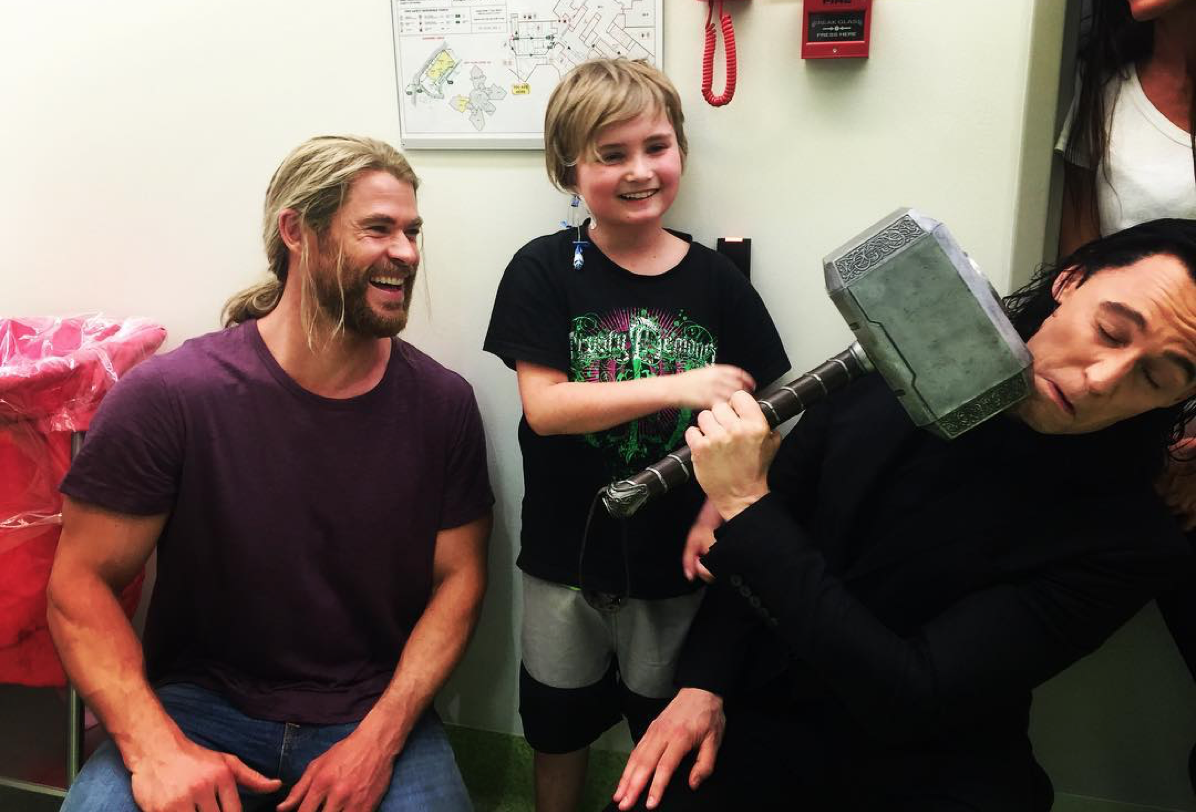 Both Chris Hemsworth and Tom Hiddleston have taken time away from filming Thor Ragnarok to visit sick children at the Lady Cilento Children’s Hospital. Situated in Queensland, Australia, the hospital is a specialist paediatric facility that cares for the most critically injured children.

Hemsworth and Hiddleston, who play Asgardian brothers Thor and Loki respectively, paid a visit to the hospital whilst filming in Brisbane. The pair even got interviewed by the children for Juiced TV, a television show made by kids at the hospital. Hemsworth brought along his signature hammer, whilst Hiddleston rocked his long dark hair. Thankfully he didn’t bring along his Chitauri Scepter.

Check out photos of their visit via these Instagram posts.

Well, loki who visited us tonight. Thank you @chrishemsworth and @twhiddleston for creating some superpowered memories for our patients! And a shoutout to the Children’s Hospital Foundation and @juicedtv for making it happen. Repost @vonw #hammertime #thor #chrishemsworth #tomhiddleston #ragnarok #marvel #godofthunder #thornado

A photo posted by LadyCilentoChildrensHospital (@ladycilentochildrenshospital) on Aug 23, 2016 at 3:39am PDT

11-year-old Koen had the very important job of interviewing @chrishemsworth and @twhiddleston for @juicedtv while they were here. Watch out for the interview on a future super-powered episode! Repost @childrensorgau #chrishemsworth #tomhiddleston #loki #thor #thorsome #ragnarok #madepossiblebychf A photo posted by LadyCilentoChildrensHospital (@ladycilentochildrenshospital) on Aug 23, 2016 at 7:22pm PDT

The Lady Cilento Children’s Hospital has been left star struck again with a visit from Chris Hemsworth and Tom Hiddleston who very kindly took time away from their busy filming schedule to visit kids and their families in hospital. Here is heart kid Amelia and her parents Daisy and Ian who had the pleasure of meeting Chris yesterday. Thank you Chris and Tom for taking time out of your day to visit and putting smiles on families faces like Amelia’s. @chrishemsworth @twhiddleston @ladycilentochildrenshospital #heartkidsqld #lcch #ladycilentochildrenshospital #heartkid #chrishemsworth A photo posted by HeartKids Queensland (@heartkidsqld) on Aug 23, 2016 at 6:56pm PDT

Whilst filming in Australia a possible link between Thor Ragnarok and Doctor Strange has potentially been revealed, alongside a sighting of Odin himself, Sir Anthony Hopkins. Despite the no doubt hectic filming schedule, it is nice to see Hemsworth and Hiddleston take the time to brighten the days of children at the hospital.