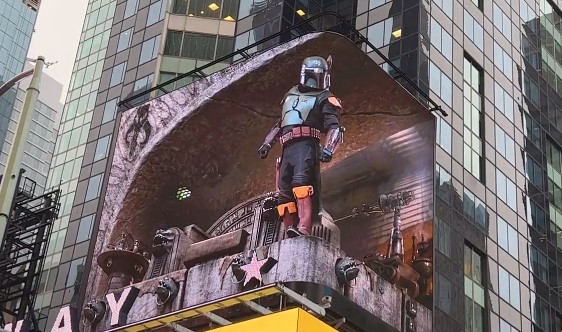 Disney+ may be preparing for the release of Obi-Wan Kenobi, but this billboard ad for The Book of Boba Fett has everyone amazed.

Have you spotted the incredible #BookofBobaFett billboard in Times Square?

Learn more about how LG and ILM brought this to life: https://t.co/PJuy010bKR pic.twitter.com/SW0bu7LhJW

The ad is basically an optical illusion that makes it look like Boba is surveying the people below. While the optical illusion does look pretty impressive, I’m curious if it will work from other angles. I think you’ll have to stand in a very specific place to make sure the ad is working properly for your eyes.

As for the show itself, The Book of Boba Fett has been bashed by fans for not having a solid enough story to last the whole season. If anything, a lot of viewers were kind of annoyed that the show kind of forgets about Boba in order to focus on Luke Skywalker and other Disney Mando Din Djarin.

With so much emphasis on Boba’s relationship with Cad Bane, you would think that they would have just dedicated an episode to him instead of just having him show up to have Boba kill him?

There certainly is room down the line for a Boba Fett sequel, and it would be great if we could follow him in the peak of his bounty hunting days. If not, there’s definitely room in the future for Tatooine’s new Daimyo.  We’ll just have to wait and see.

Obi-Wan Kenobi comes out May 27, but you can catch the full season of The Book of Boba Fett now on Disney+.