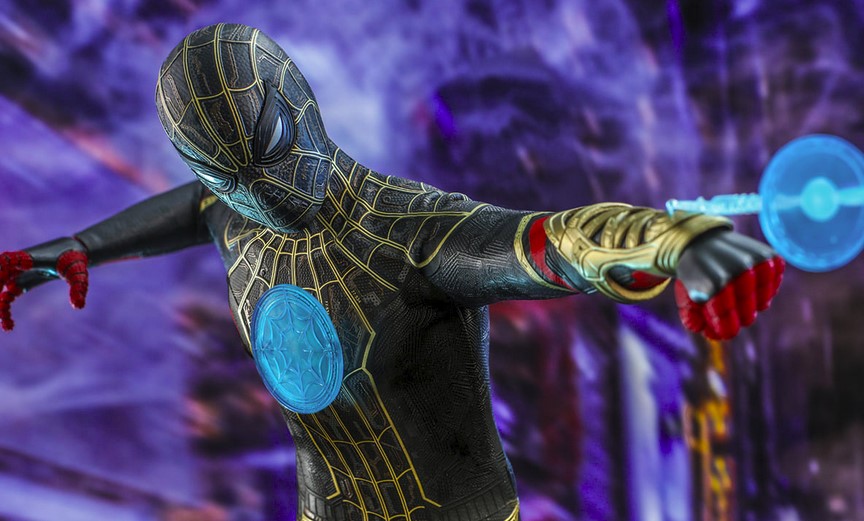 A lot of Spider-Man fans are holding their breath for Sony to release the first teaser for Spider-Man: No Way Home, and while LEGO has already leaked one suit, Hot Toys has official revealed a new black and gold suit which will feature in NWH.

Check it out the new figure for No Way Home down here:

The friendly neighborhood super hero has continued to share new looks in multiple movie appearances, and got fans amazed with his upgraded gadgets. To prepare fans for the Spidey’ return, today Hot Toys is ecstatic to introduce Spider-Man and his new Black & Gold Suit, one of the new suits that will be seen in the movie, as 1/6th scale collectible figure ahead of the release of Spider-Man: No Way Home.

Expertly crafted based on the appearance of Tom Holland as Peter Parker in the movie, the latest Spider-Man figure features a head sculpt with stunning likeness, a masked head sculpt with multiple pairs of interchangeable Spider-Man eye pieces to create numerous Spider-Man’s expressions, a beautifully designed Black and Gold Suit with detailed web patterns, a selection of highly detailed accessories including a gauntlet, mystic spider-web effects, a Spider-Man mask, assorted spider-web shooting effect parts, and a themed dynamic figure stand.

Black and Gold is the new Red and Blue! Be sure to add this Spidey to your amazing wall crawler collection!

As you can see from the figure, it looks like Spider-Man will be able to make use of some magic powers. This is just my guess, but I’m thinking this will be a suit that Doctor Strange helps him make. You’ll notice that Spidey has only one gauntlet on his left arm, and I have a feeling that could be for the Eye of Agamotto. Then again, since the projections are blue, I’m guessing Spidey is lent the Space Stone—what better way to travel to multiple places and dimensions?

We have no idea when Sony plans to drop the first teaser for No Way Home, but it’s possible it could be after the release of the Venom sequel which comes out in October. With all this hype building though, fans can’t help but hope that Sony is going to surprise them soon.