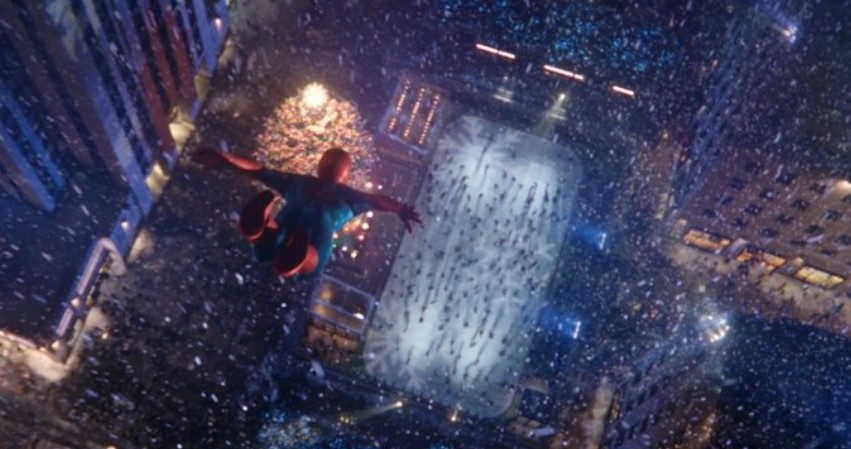 Tom Holland’s Peter Parker may have worn the ‘Integrated Suit’ in the final battle at the Statue of Liberty, but we get a glimpse of one more classic looking suit toward the end of the movie. We know that it’s reminiscent of the older Spider-Men in the comics, but the official No Way Home script (via Gizmodo) has revealed just where Peter got his inspiration.

Apparently, Peter’s latest redesign is a nod to the suits from past Spider-Men Tobey Maguire and Andrew Garfield. The script reads:

Spider-Man flips and rolls across a snowy roof in a BLUE AND RED SUIT (new for him, but reminiscent of suits he’s seen before). Spider-Man leaps and—

If that isn’t enough to tug at your heartstrings, the final lines in the script explain where the movie ends, and what the consequences mean for Spider-Man moving forward. The script continues:

—Soars over the Rockefeller Christmas tree with a newfound sense of freedom. Liberated from having to juggle two lives. Peter Parker is no more, but Spider-Man lives on…

Admittedly, Spider-Man: No Way Home kind of has a bittersweet ending. Though Peter did get to send all of his villains back and actually save them, he kind of has to lose himself and everyone that he loves—even his Aunt May.

We don’t know what’s in store for the future of Tom Holland’s Peter Parker, but this definitely brings the character back to ground zero. Now he’s lost all of his connections with Stark Industries and is alone and dirt poor. It’s sad to see Peter in the state, but it makes you want to root more for him as a character; especially since his Spider-Man has always been the underdog.