Once the home release of Star Wars: The Last Jedi is out of the way, Lucasfilm can focus solely on marketing Solo: A Star Wars Story. Speaking of marketing, this cool standee actually lets fans sit with Han and the crew on the cockpit of the Millennium Falcon.

Prepare to make the jump into hyperspace. Solo: A Star Wars Story is in theaters on May 25. #HanSolo pic.twitter.com/Mf39OAGW7M 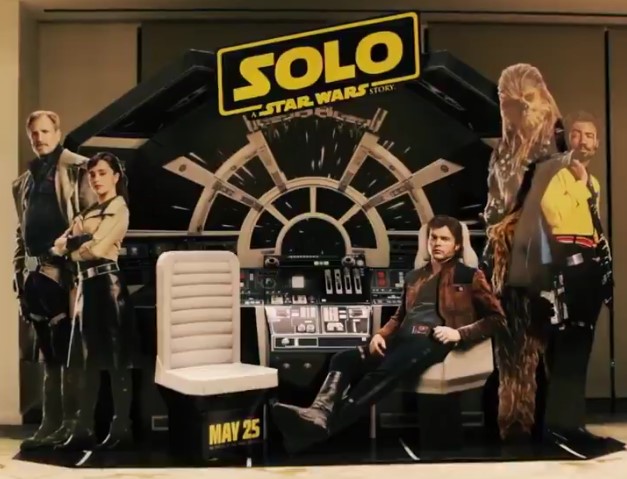 Besides Han and Chewie, the standee also includes young Lando Calrissian (Donald Glover), Qi’Ra (Emilia Clarke), and Tobias Beckett (Woody Harrelson). We don’t get an image of Lando’s co-pilot droid L3-37 (Phoebe Waller-Bridge), but I think that’s because the standee is already full enough as it is.

I think this thing is a clever piece of marketing, and I can imagine some hardcore Star Wars collectors wanting their own version of it to keep in their homes. Heck, I want one.

Fans may have been wary of the Solo movie earlier in the year, but ever since the trailers and images came out, everyone seems to have gone on board. Hopefully, Ron Howard managed to pump out a film that feels like an original vision despite having to take over really late into the project.

Board the Millennium Falcon and journey to a galaxy far, far away in ‘Solo: A Star Wars Story,’ an adventure with the most beloved scoundrel in the galaxy. Through a series of daring escapades deep within a dark and dangerous criminal underworld, Han Solo meets his mighty future copilot Chewbacca and encounters the notorious gambler Lando Calrissian, in a journey that will set the course of one of the Star Wars saga’s most unlikely heroes.