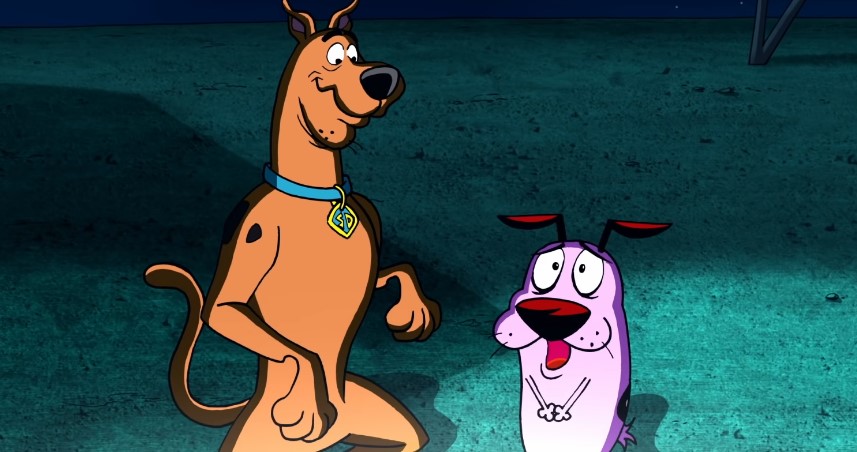 Courage the Cowardly Dog was one of the biggest shows in Cartoon Network back in the early 2000s, and now Courage is geared for a comeback with the original cowardly dog, Scooby-Doo.

An original animated feature so exciting it’s scratching at the door! Comedy is unleashed when Scooby-Doo, your favorite mystery-solving mutt, teams up for the first time with Courage the Cowardly Dog. The canine colleagues sniff out a strange object in the middle of Nowhere, Kansas, the backwoods hometown of Courage and his owners, Eustace and Muriel Bagge. Soon, the mysterious discovery puts them on the trail of a giant cicada monster and her wacky winged warriors. Fred, Velma, Daphne and Shaggy know that this job is too big for a flyswatter. They’ll need the help of the doggy duo to piece together the puzzle. Can Scooby and Courage overcome their jitters and defeat the insect army before the whole world bugs out? Try not to get scared. We double-dog dare you!

While the two shows are incredibly different when it comes to style and tone, it looks like WB has found some kind of melding of the two with this film. While Mystery Inc. still looks close to the original cartoon, they fit right in the world of Courage; and all the other monsters and side characters look like they followed the aesthetic of Cowardly Dog.

Straight Outta Nowhere: Scooby-Doo Meets Courage the Cowardly Dog is set to come out sometime this year on digital and DVD.