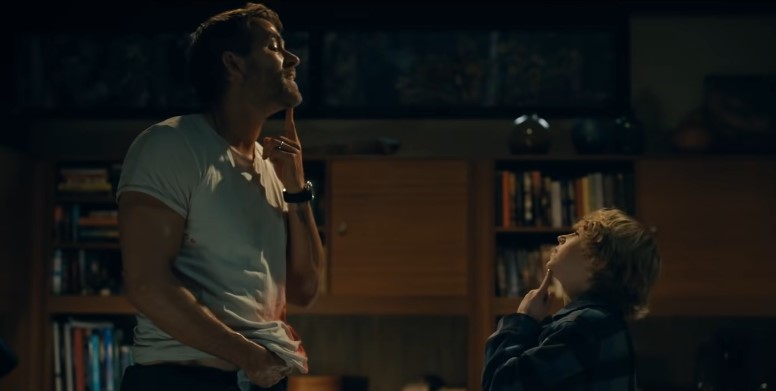 After Stranger Things and Free Guy, Shawn Levy has once again teamed up with Ryan Reynolds for a family-friendly action film. Check out Netflix’s first trailer for The Adam Project.

Adam Reed (Walker Scobell), age 13, and still grieving the sudden death of his father (Mark Ruffalo) a year earlier, walks into his garage one night to find a wounded pilot hiding there. This mysterious pilot (Reynolds) turns out to be the older version of himself from the future, where time travel is in its infancy. He has risked everything to come back in time on a secret mission. Together they must embark on an adventure into the past to find their father, set things right, and save the world.

The three working together, both young and grown Adam come to terms with the loss of their father and have a chance to heal the wounds that have shaped them. Adding to the challenge of the mission, the two Adams discover they really don’t like each other very much, and if they’re going to save the world, they’re first going to have to figure out how to get along.

The film has assembled quite an impressive cast with Marvel actors Zoe Saldana (Guardians of the Galaxy) and Mark Ruffalo (Avengers). Even then, the Marvel reunion is the least hyped thing about this film, because it also finds Ruffalo reunited with his 13 Going on 30 co-star Jennifer Garner—and the two are playing another couple.

Looking at Levy’s filmography, we know that The Adam Project is going to aim for fun for the whole family; with some touching moments, and exciting action-adventure—top that with the charisma and humor of Reynolds, and Netflix may just have another big hit in its hands.

The Adam Project comes to Netflix on March 11.