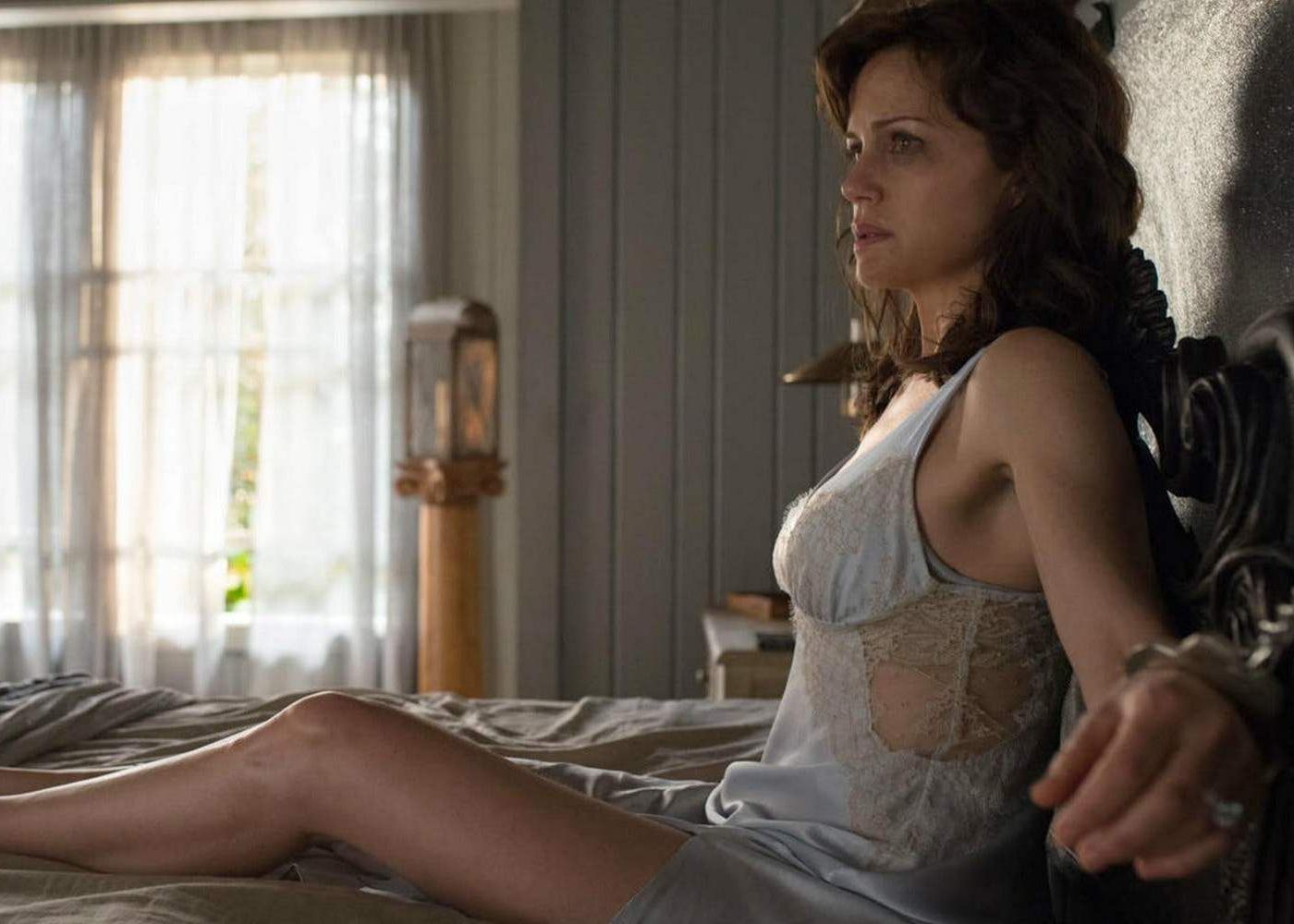 The recent flurry of Stephen King adaptations started quite badly with the nadir plumbing Dark Tower, but then Pennywise crawled from beneath Derry in glorious fashion to steal children and our hearts. The third of 2017’s twisted tales is 1992’s Gerald’s Game, a story which peers into the darkness, binds you there for the duration of its mind meld narrative, before almost fumbling the ending when it lets you up to breathe.

Bruce Greenwood and Carla Gugino are Gerald and Jessie Burlingame. We don’t know much about them bar the fact that they’re driving to that most dangerous of genre locations, a remote cottage retreat, for what appears to be a weekend in the bedroom. We know this because Jessie packs her brand new slip, and Gerald, rather ominously tops off his case with a pair of thick metal handcuffs.

Things aren’t what they seem for our white picket fence couple, and when Gerald’s advances become a mix of creepy and downright scary, Jessie’s reluctance to participate in his titular game leads to a massive heart attack at the end of the bed. The problem is, she is already tied up, with any means of escape out of stretching distance.

With a doozy of a set-up like that, the success of the film can often rest on the performance of the last man, or in this case woman standing, or sitting, hand-cuffed to a bed made of reinforced wood. Here it’s Carla Gugino, who’s imminently watchable as Jessie, but this isn’t a Hanks in Cast Away or Matt Damon in The Martian kinda flick, because the narrative sends Jessie into the mouth of madness. This means she spends time within her memories and own psyche, always having someone to act against, to reveal who that is would be spoilerific, but like most of Gerald’s Game, not knowing is half the fun.

Bruce Greenwood plays his part as the overtly creepy Gerald. His introductory beats are so skin crawlingly revolting, whether it’s sliding his hand up his clearly uncomfortable wife’s leg, or confidently striding from the bathroom, cuffs-in-hand, he makes a terrific human faced bogeyman.

Gerald’s Game also makes sure that it doesn’t stretch the concept too thin. There are some neat MacGyver style solutions to Jessie’s numerous predicaments, but it’s sometimes the dramatic reveals that outdo any shelf tipping or puzzle solving. As it’s a Stephen King story, you’d hope for a few elements of horror, some of which are undeniably hokey, like the unnecessarily slavish ending. But some moments are at the other end of the scale, one in particular, that is an audience gasping, look away scene of body horror, the wince inducing likes of which haven’t been seen since 127 Hours. You have been warned.

It’s also worth knowing that whilst the film can be delicious fun, it does take you down some very, very eclipse dark paths, which ultimately leads to a message of defiance in the face of manipulative abuse, but is a requisitely hard watch.

Gerald’s Game won’t be to everyone’s taste, but that seems to be the default setting for both the genre and Stephen King’s own work. However, with game performances from its two leads, and a willingness to go where it takes you, this will be a decent Friday night thrill ride when it hits Netflix on September 29th.