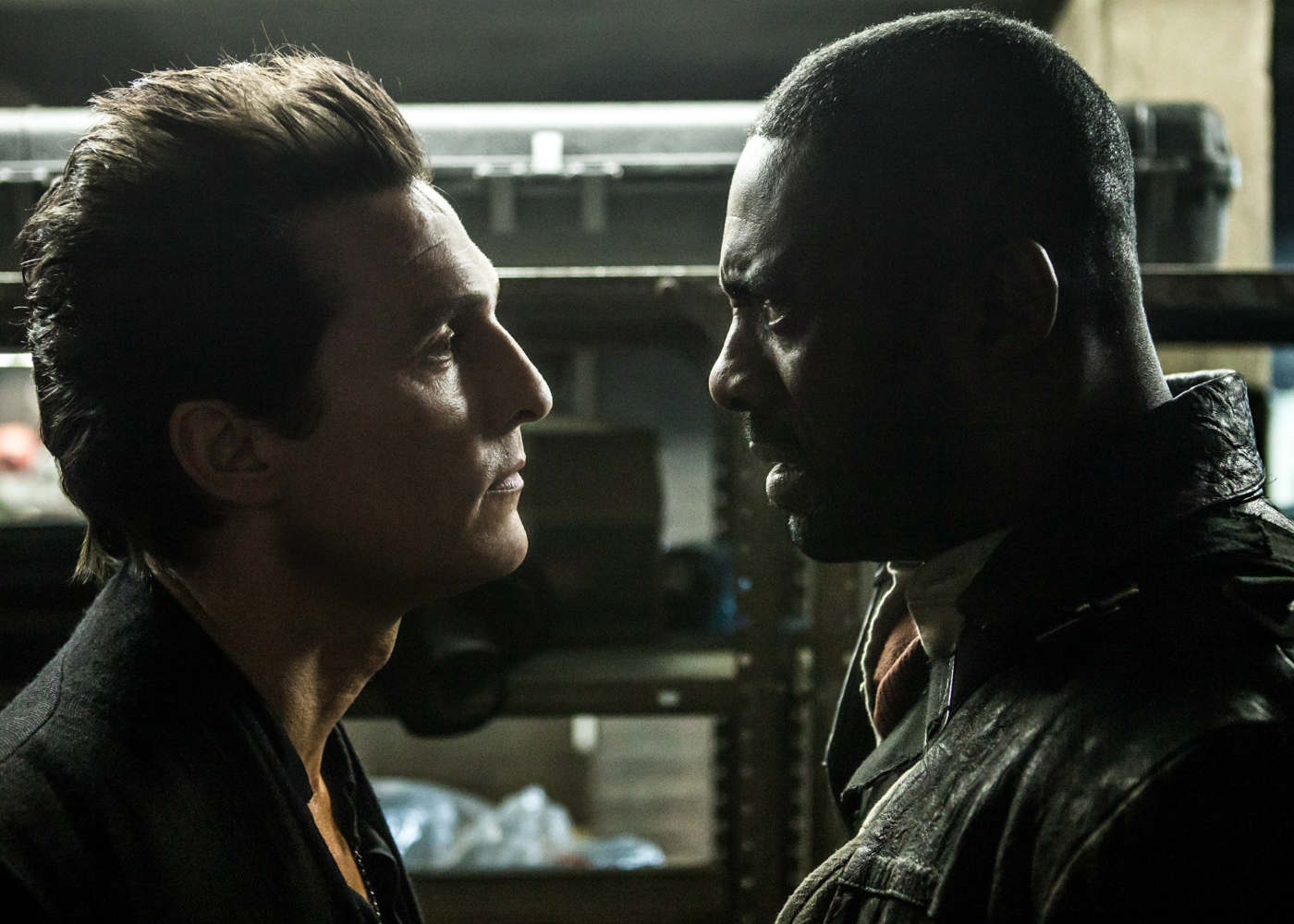 For so long now, Stephen King’s multi-format, genre melding opus, The Dark Tower had been deemed unadaptable for cinema. In a tale almost as complex, drawn out, and full of legend as the adventures of Roland the Gunslinger, the project went through multiple directors and release dates, before finally proving everyone correct and arriving in the form of this unsatisfying mess of a movie. Even if your expectations are not Tower high, there’s no way you could have imagined that it would turn out this, well bad isn’t the word, just plain mediocre and amateurish.

We’ll keep the synopsis brief, because brevity is the watch-word for The Dark Tower. So after a prologue in which we find Walter, aka The Man in Black, aka Matthew McConaughey, sucking a power called ‘shine’ from the children of the world, all so that he can destroy the titular tower, a giant monolith that keeps the worlds turning, or something, we thrown into the present day world of downtown New York. Here we find Jake (Tom Taylor), a bullied, introverted kid who has visions of a Gunslinger (Idris Elba) and his nemesis, warring in a far off world, which before you know it, or can really understand how, has found his way there to team up with the pistol wielding nomad on his mission to save the world, or something.

There is an exchange about half way through the film, in which Idris Elba’s Gunslinger is told that he is more than six months travel away from his destination. In the books he is a character who has traversed a desert landscape for an insurmountable period of time. You can feel the weight of his task, a man burdened by nobility and grief. Here he is a man who responds to that news with “but you can get me there quicker than that?” And therein you’ll find the problem with this truncated 88min epic, it’s in a hurry to get nowhere, fast.

From the off we’re thrown head first into exposition central, with Jake visiting a psychiatrist who’s going through his premonition pictures. He spews reams of dialogue that are meant to act as character development for Jake, but that also double as myth making and world building for the dimension that we’re about to hastily be edited towards.

Its fifteen minutes of screen time that could have taken an hour, but that’s ok if A Royal Affair director, Nikolaj Arcel, is hurrying us towards the meeting of two iconic literary characters that went to war over the course of eight of King’s books? He isn’t.

Instead there are no grand introductions. Take Walter, whose ushering onto the screen is underplayed to the point of redundancy, being reduced to a whistling Halloween showman, bereft of anything approaching intimidation. In fact, he’s like a cocky baddie-of-the-week from a lesser episode of Buffy the Vampire Slayer or Supernatural. As for Roland, the infamous Gunslinger, he’s quickly thrown into proceedings with a hasty edit, jumping to a scene that’s meant to act as his characters motivation, but the whole jarring nature of it just results in confusion and a lack of investment.

The films biggest mistake, amongst many, is the decision to make Jake the focus of the story, completely wasting the fact you have Idris Elba and Matthew McConaughey as your leads. The books start off point was always Roland, who’s side-lined here in favour of a demographic snaring young lead, which would be ok had Taylor not been such a bland presence. He never reacts to the life-altering discoveries that are being presented to him, taking everything in his stride, as if the central avatar in a third person console game. At least he could have reflected some of the utter confusion experienced by the audience.

It’s a state of mind caused by the fact that The Dark Tower is one of those movies, whether it’s due to multiple screenwriters or editing suite decisions, in which stuff just happens for inexplicable reasons. Remember when you were a kid playing with your toys and you made up your own narratives regardless of logic? That’s what this feels like. A series of coincidences and events, which carry no weight, leave you dumfounded, and ultimately disinterested.

Finding anything positive aside from Elba is a tough task, but the screams in the ‘beamquakes’ are a nice touch, befitting of the horror sensibilities of its creator, and the way in which Walter uses his Jedi mind trick to manipulate humans is fun, oh, and then there’s the, erm, well……no that’s about it. It’s painful to admit, but The Dark Tower feels like a rubbish TV pilot that never made it to series.