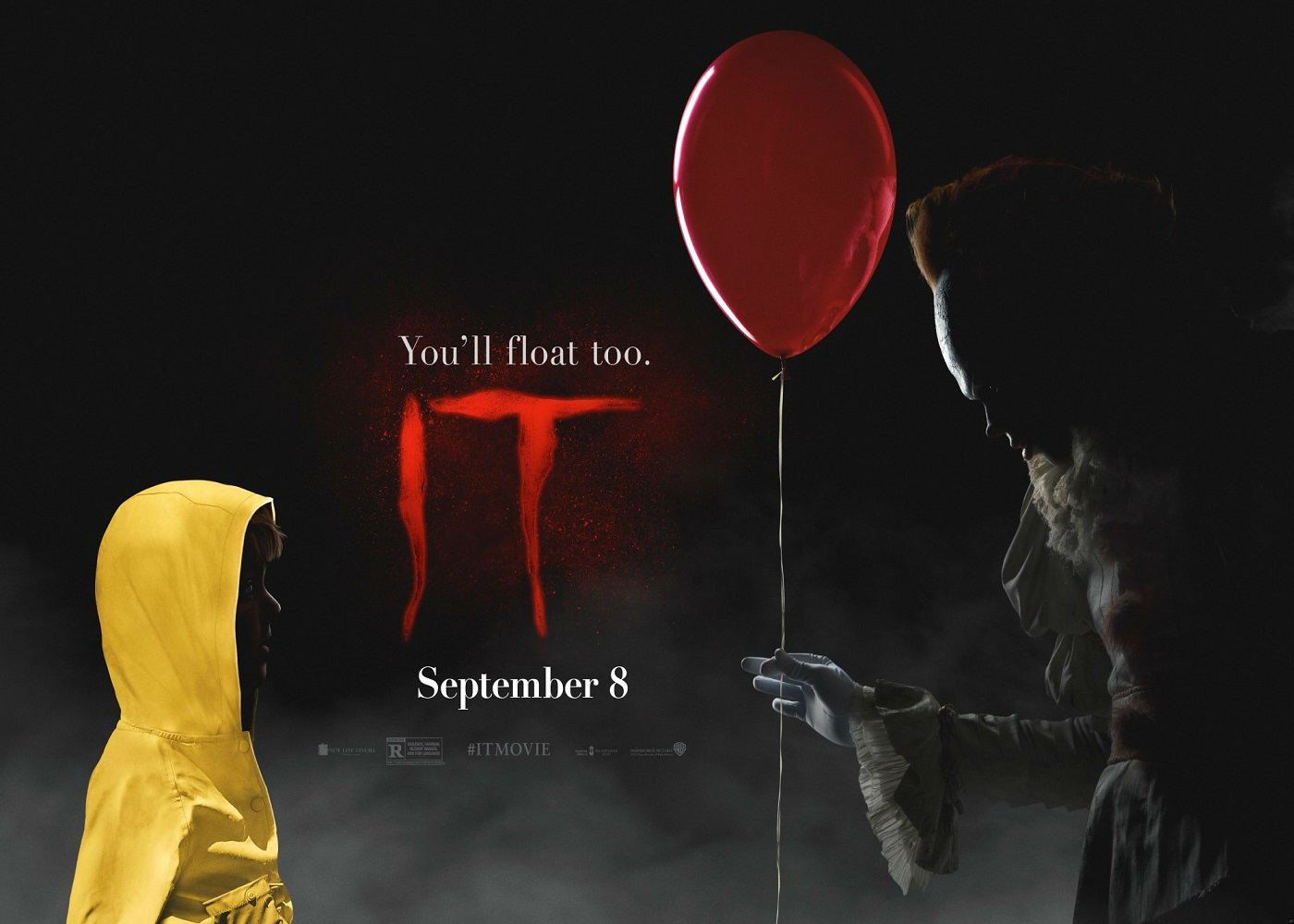 There were rumblings as loud as the dank water rushing through the Derry City standpipes when a fresh adaptation of Stephen King’s door stop behemoth IT was announced. The 1990s version, which was actually a TV-movie, is viewed through a generous nostalgic haze, particularly the performance of Tim Curry as shapeshifting Clown, Pennywise. True Detective director Cary Fukunaga was signed on to helm, before jumping ship citing creative differences, and this allowed Mama director, and self-confessed King fan, Andy Muschietti, to create his own vision of King’s horror opus, and what a bloody great one it turned out to be. Emphasis on the bloody.

Sensibly opting to streamline King’s 1138 page novel by gutting the adult narrative (which is arguably the lesser of the two, and will be saved for a potential sequel) to focus on the seven members of The Loser’s Club. A group of children who live in the unremarkable town of Derry, Maine. Unremarkable aside from the fact that once every couple of decades, a spate of unsolved child murders blight the history of the area, with one common thread dating back through the records, the appearance of a mysterious, balloon carrying clown (Bill Skarsgard).

Only visible to children, this puts The Losers right in the firing line of the painted monster, so led by stuttering Bill Denbrough (Jaeden Lieberher – Midnight Special), whose mission is more personal than most, Beverley Marsh (Sophia Lillis), Richie Tozier (Finn Wolfhard), Mike Hanlon (Chosen Jacobs), Ben Hanscom (Jeremy Ray Taylor), Eddie Kaspbrak (Jack Dylan Grazer), and Stanley Uris (Wyatt Olef), they must battle their demons, as well as a literal one, in order to prevent their names becoming forgotten victims of Pennywise the Clown.

Even if this first Chapter of IT is only dealing with half of King’s weighty tome, plaudits must still be reserved for the job done in condensing such a sprawling narrative into a coherent, often markedly improved story. For example, take Mike Hanlon’s thread, which in the book is a dense, multi chaptered, multi generational series of tales, yet here is repackaged into a horrifying, subtly layered encounter with IT, and a tell-all meet-the-gang confessional. Such successful trimming also means that there’s only a single use of the infuriating ‘beep-beep-Richie’ line from the novel.

Where this truncation technique doesn’t work so well is in each member of The Loser’s initial encounters with IT, which can feel slightly rushed in order to get all of the pieces in place. Although this might just be a side-effect of having to follow the indelibly stunning opening sequence. One of IT‘s greatest achievements is in how it makes the drain storm exchange so brutally fresh. Anything that follows what Muschietti does with Georgie and his yellow mac is going to be haunted by the unique and lasting impact of the scene.

Much of this has to do with Skarsgard’s take on Pennywise; employing a guttural drawl, maniacal laugh, and completely owning the shift-in-your-seat moments of silence, he is a sparingly used monstrous creation who brings the best out of the young cast, and whose ever-changing eyes will haunt those moments when you close your own at night.

Ultimately it’s The Losers that you’ll fall in love with. If Stranger Things’ Finn Wolfhard is the MVP, bringing the house down with almost every profanity littered line, then your heart will break for Jeremy Ray Taylor and his unrequited love for Beverly Marsh, played wonderfully by Sophia Lillis, even if the damsel-in-distress plot mechanics feel a touch out of step with her Tomboy survivor. In fact, all of the child actors are great, imbuing their literary counterparts with so much likability that their plight is genuinely terrifying to watch, even if you know their individual fates from the book.

Having said that, Muschietti skews this world of Derry ever so slightly, so that even if you are familiar with the story, there are still surprises to be had, and improvements, yes improvements made.

Those include the fears upon which IT preys being slightly different for each of the kids, more honed to suit a running time, but ultimately more successful. Plus, by dropping the dimensional plane nonsense from the book, we get a much more linear, powerful story, pitting good-against-evil and ensuring the focus is on the fate of the kids versus this singing, dancing, snarling manifestation of evil. Don’t worry though, fans of the book will still get their share of Henry Bowers, and creepy chemists, while multiple nods can be found in numerous Easter eggs (graffiti, Lego models), and there’s also a playful acknowledgment of Tim Curry’s comparatively pantomime Pennywise.

Some may grumble at the tone, or the Spielberg/Amblin/Stranger Things vibe, which is unrelenting at times, but never anything other than fun or adorable. If you can find a better scene this year than Ben Hanscom and Beverly Marsh discussing New Kids on the Block, then paint my face and call me Penny-not-so-wise. IT is scarily good.