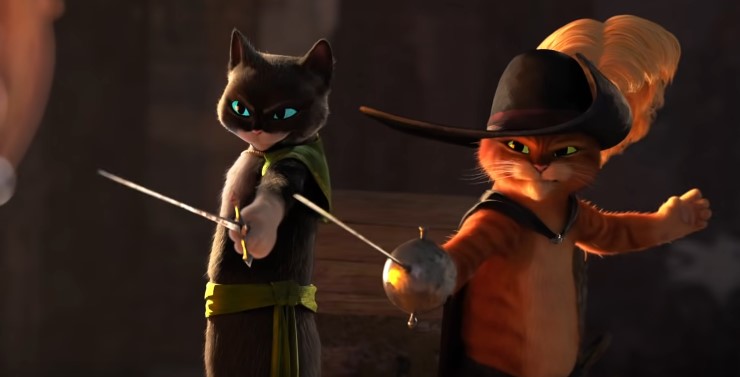 The Puss in Boots movie came out back in 2011, and now Antonio Banderas is returning to voice the infamous ogre-slayer in Puss in Boots: The Last Wish.

Here’s the trailer for the Puss in Boots sequel:

The story will be following Puss and his old flame Kitty Soft Paws (Salma Hayek) as they explore the Dark Forest looking for the mythical Wishing Star; as it turns out, Puss has already used up eight of his nine lives, and he will be using the star to restore all of them.

Along for the ride is Perro (voiced by Harvey Guillen from What We Do in the Shadows),and they will have to go up against the main villain which will be Goldilocks (Florence Pugh) and the Three Bears Gang. The Big Bad Wolf (Wagner Moura) has also found himself in the mix.

Seeing that the last movie came out more than a decade ago, there has been a notable change when it comes to the art style of the movie; Puss looks a lot more animated, and even the human characters seem more stylized as compared to how they looked in the old Shrek films.

Some fans are actually hoping that the movie could mean a return for Shrek himself, who is still enjoying immortality as an internet meme. While his story is pretty much wrapped up, I think there are some places for the character to go, especially now that there’s been time for his kids to age and have their own stories told.

Puss in Boots: The Last Wish is slated for a release on Sept. 23.