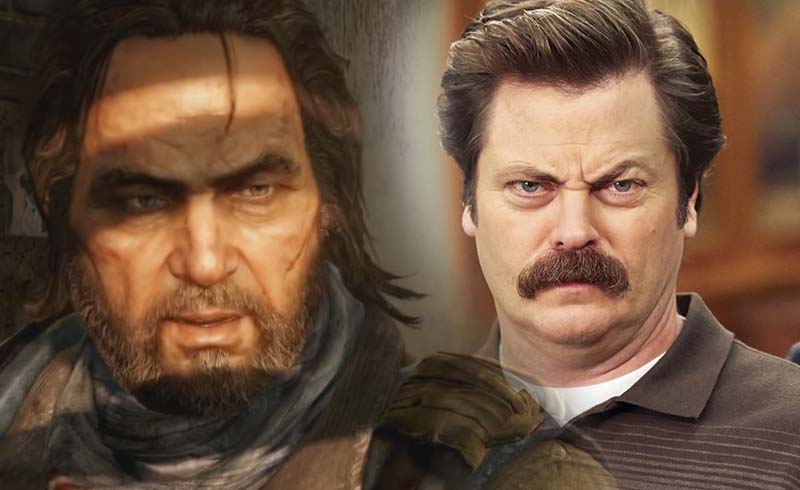 UPDATE: Variety confirmed that Offerman is indeed going to play Bill in HBO’s The Last of Us. Con O’Neill had to leave due to a scheduling conflict.

After a successful run with HBO’s Chernobyl, Craig Mazin is now ready to tackle a video game adaptation with the upcoming Last of Us series. The biggest star attached to the project is probably Pedro Pascal (The Mandalorian), but it looks like a famous face from Pawnee, Indiana is going to be making an appearance on the show as well.

As confirmed by actor Murray Bartlett to The Guardian, Nick Offerman (Parks and Recreation) will be appearing in the Last of Us series. When asked about The Last of Us, Bartlett explained, “A lot of my scenes are with Nick Offerman. Playing off him was awesome.”

We don’t have any details on who Offerman is going to be on the show, but we do know that Bartlett is going to be playing the part of Frank. In the game, Frank was the partner (and possibly former lover) of Bill, a character Joel and Ellie meet who has booby-trapped an entire town and kept it to himself.

While Offerman would have been the perfect choice to play Bill on the show, the part had already been given to Con O’Neill. Could they have recast the part of Bill with Offerman, or is he playing someone else entirely? We don’t know who else Frank could have been interacting with, because in the game, we only meet Frank after he’d died.

One thing’s for sure, Offerman and his introverted alpha male Ron Swanson would have been a good blueprint for a hardened scavenger (and possible homosexual) like Bill.

No release date has been set for HBO’s The Last of Us.