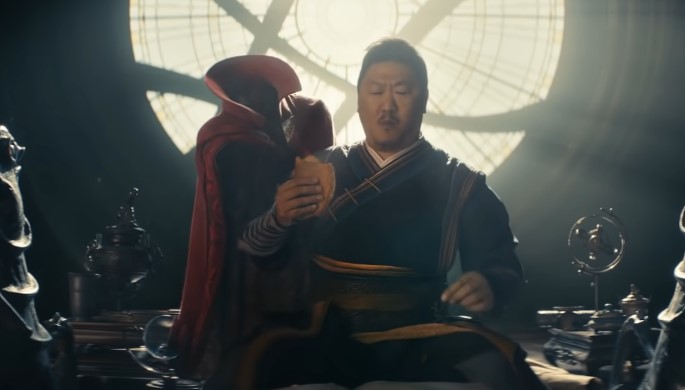 Everyday we get closer to May and that means the release of Doctor Strange in the Multiverse of Madness. We’ve had some fun movie tie-ins with properties like Spider-Man before, but this new Tide commercial has Wong fighting with Doctor Strange’s cloak.

Check out the Tide commercial here:

Even a Sorcerer Supreme deals with stains. Now, Wong has to clean the Cloak of Levitation before Doctor Strange gets back.

If you’re not familiar with the Tuna Melt reference, it’s from way back in Avengers: Infinity War; right before the Hulk crashes into the Sanctum, Strange asks Wong if he wants him to bring anything back, to which Wong says, “I wouldn’t say no to a tuna melt.” This has led to several jokes within the fandom about Wong’s choice of sandwich, so it’s pretty neat that Tide would want to lean in on that joke.

We don’t know exactly what to expect with Multiverse of Madness, but some are almost sure that someone in Strange’s circle is going to die. While What If…? Featured multiple scenarios where Christine Palmer died, I have a feeling that Strange might actually lose Wong. With Wong being dubbed the Sorcerer Supreme in No Way Home, his death would mean that Strange would have to take on the role again—but I am just speculating at this point.

In Marvel Studios’ “Doctor Strange in the Multiverse of Madness,” the MCU unlocks the Multiverse and pushes its boundaries further than ever before. Journey into the unknown with Doctor Strange, who, with the help of mystical allies both old and new, traverses the mind-bending and dangerous alternate realities of the Multiverse to confront a mysterious new adversary.

Doctor Strange in the Multiverse of Madness comes to theaters on May 6.