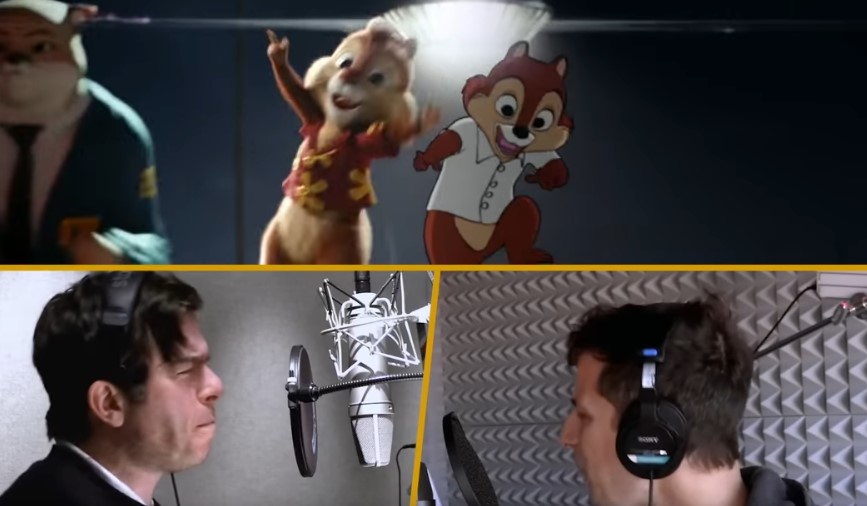 Chip ‘n Dale: Rescue Rangers has managed to nab an all-star cast to appear in the film, and though they are only providing voices, we have a new trailer that actually shows us all of the actors in the booths while they record their lines.

We’ve known for a while that John Mulaney and Andy Samberg were at the center of this movie, but this time we have a look at Erica Bana, J.K. Simmons, Seth Rogen, and Keegan-Michael Key. I guess they didn’t have time in the teaser to give us a look at other actors in the movie like Rachel Bloom (Crazy Ex-Girlfriend) and Will Arnett (BoJack Horseman).

I have to say, the film actually has a pretty interesting concept and is clearly drawing inspiration from the world of Who Framed Roger Rabbit. It’s kind of a shame that we won’t be able to see the movie in theaters, but if things go well for this release, maybe the sequel could be the one hitting the big screen.

In “Chip ‘n Dale: Rescue Rangers,” Chip and Dale are living amongst cartoons and humans in modern-day Los Angeles, but their lives are quite different now. It has been decades since their successful television series was canceled, and Chip (voice of Mulaney) has succumbed to a life of suburban domesticity as an insurance salesman. Dale (voice of Sandberg), meanwhile, has had CGI surgery and works the nostalgia convention circuit, desperate to relive his glory days. When a former castmate mysteriously disappears, Chip and Dale must repair their broken friendship and take on their Rescue Rangers detective personas once again to save their friend’s life.

Chip ‘n Dale: Rescue Rangers premieres on Disney+ on May 20.