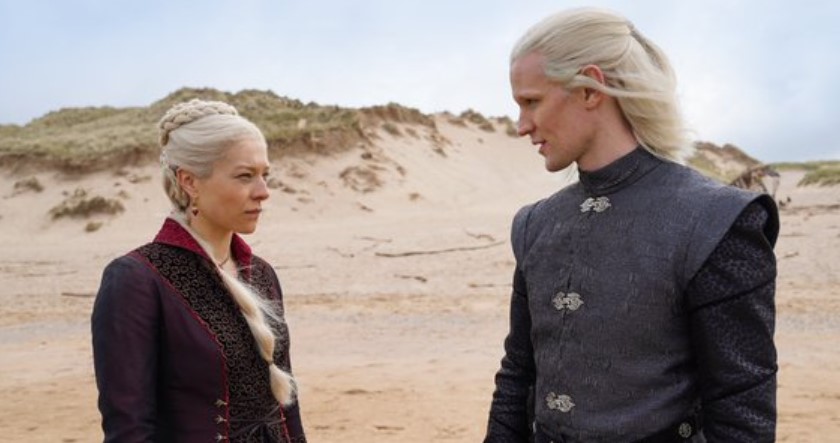 While r/freefolk is still busy complaining about how David Benioff and D.B. Weiss had ruined the eighth season of Game of Thrones, HBO is pushing forward with their Targaryen-centric spinoff House of the Dragon. The show is currently undergoing production, and we have our first look at the ancient Targaryens as well as these other power players in old Westeros.

These were shared by the official House of the Dragon account:

Official descriptions have also been released by HBO (via BuzzFeed News):

Rhaenyra Targaryen: “The king’s first-born child, she is of pure Valyrian blood, and she is a dragonrider. Many would say that Rhaenyra was born with everything… but she was not born a man.”

Daemon Targaryen: “The younger brother to King Viserys and heir to the throne. A peerless warrior and a dragonrider, Daemon possesses the true blood of the dragon. But it is said that whenever a Targaryen is born, the gods toss a coin in the air.”

“Ser Otto loyally and faithfully serves both his king and his realm… As the Hand sees it, the greatest threat to the realm is the king’s brother, Daemon, and his position as heir to the throne.”

Alicent Hightower: The most comely woman in the Seven Kingdoms.” She was raised in the Red Keep, in King’s Landing, “close to the king and his innermost circle; she possesses both a courtly grace and a keen political acumen.”

Lord Corlys of House Velaryon (also known as the Sea Snake) is said to be from a Valyrian bloodline as ancient as House Targaryen. His description continues:

“As ‘The Sea Snake,’ the most famed nautical adventurer in the history of Westeros, Lord Corlys built his house into a powerful seat that is even richer than the Lannisters and that claims the largest navy in the world.”

It’s said that the series is set 300 years before the events of Game of Thrones, so we won’t be able to watch anything like Robert’s Rebellion, but we could get to see the crack starting to form when it comes to the Targaryen Dynasty. Hopefully we also get to see The Wall at its best, and maybe the show can give us a relay of events that led to the wealth of the Lannisters or the degradation of the Wall’s status as protectors of the Realm.

Catch House of the Dragon when it comes to HBO sometime in 2022.