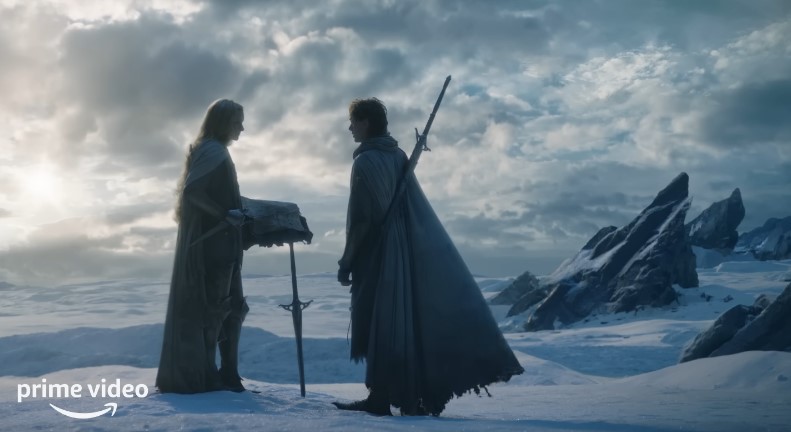 As previously teased, Amazon Prime Video has dropped a new trailer for their upcoming Lord of the Rings series Rings of Power, and we get a look at another era of Middle-earth, where nobody has even heard of the Dark Lord Sauron.

Check out the trailer for Rings of Power down here:

Amazon Prime Video’s The Lord of the Rings: The Rings of Power brings to screens for the very first time the heroic legends of the fabled Second Age of Middle-earth’s history. This epic drama is set thousands of years before the events of J.R.R. Tolkien’s The Hobbit and The Lord of the Rings, and will take viewers back to an era in which great powers were forged, kingdoms rose to glory and fell to ruin, unlikely heroes were tested, hope hung by the finest of threads, and the greatest villain that ever flowed from Tolkien’s pen threatened to cover all the world in darkness. Beginning in a time of relative peace, the series follows an ensemble cast of characters, both familiar and new, as they confront the long-feared re-emergence of evil to Middle-earth. From the darkest depths of the Misty Mountains, to the majestic forests of the elf-capital of Lindon, to the breathtaking island kingdom of Númenor, to the furthest reaches of the map, these kingdoms and characters will carve out legacies that live on long after they are gone.

With us being able to see the ruins of Moria and other locations in Fellowship of the Ring, Rings of Power takes place around the Second Age, meaning we’ll actually be able to see these ruins in their full glory when they were all still populated and thriving.

Since Galadriel is one of the returning faces that we meet in the books, it looks like she’ll have quite tha major role in this series. She’s also going to be interacting with Elrond a lot. I wonder if we’re going to be getting a look at the wizards in this show as well, because I’m sure everyone will take issue with someone else playing the role of Gandalf.

So far, the series looks fantastic. Hopefully the premiere manages to meet expectations—no matter how ridiculously high they may be.

Amazon Prime Video premieres The Lord of the Rings: The Rings of Power this Sept. 2.