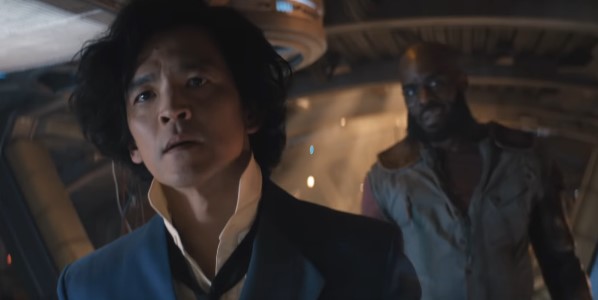 After a reveal for the intro at TUDUM 2021 and a teaser, Netflix has finally dropped a proper trailer for their live-action Cowboy Bebop, and it gives a better over-all vibe of the upcoming show starring John Cho, Daniella Pineda, and Mustafa Shakir.

Check out the new Cowboy Bebop trailer down here:

One very prominent element in the original Cowboy Bebop series is the music, and they even managed to land the OG Bebop composer Yoko Kanno to provide the score for the show. Besides some character interactions, we also get a look at a lot of the space setting and even have Spike riding his red Swordfish.

When it comes to comparisons from the anime, the live-action series tries its best to bring the same elements to life, but personally I think it kind of just made the series feel more cartoon-y. While the anime felt a lot more serious and grounded, this adaptation seems to have a lot more color and campiness.

Then again, that’s just my opinion. I’m hoping that the series proves me wrong when it debuts next month.

COWBOY BEBOP is an action-packed space Western about three bounty hunters, aka “cowboys,” all trying to outrun the past. As different as they are deadly, Spike Spiegel (John Cho), Jet Black (Mustafa Shakir), and Faye Valentine (Daniella Pineda) form a scrappy, snarky crew ready to hunt down the solar system’s most dangerous criminals — for the right price. But they can only kick and quip their way out of so many scuffles before their pasts finally catch up with them.

Catch Cowboy Bebop when it debuts on Netflix this Nov. 19.