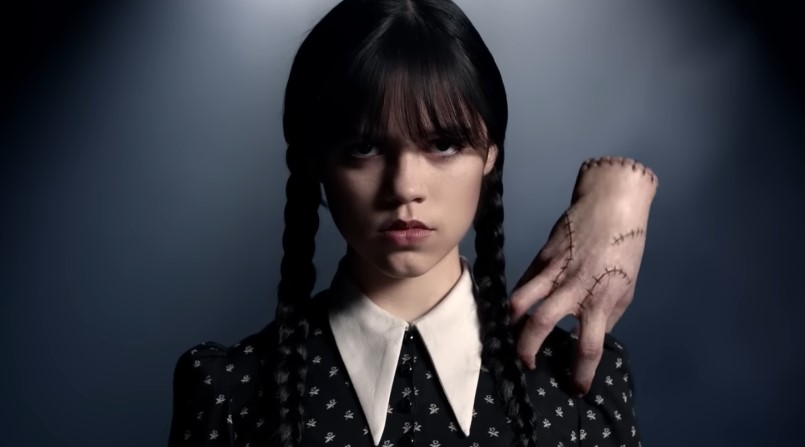 Ghostface may not have been able to get Jenna Ortega in the latest Scream movie, but she’s going to be subject to more horrors with Tim Burton’s Addams Family spinoff, Wednesday. The series is set to come out sometime this year, and we have a look at Ortega in costume along with another… thing.

A sleuthing, supernaturally infused mystery charting Wednesday Addams’ years as a student at Nevermore Academy. Wednesday’s attempts to master her emerging psychic ability, thwart a monstrous killing spree that has terrorized the local town, and solve the supernatural mystery that embroiled her parents 25 years ago – all while navigating her new and very tangled relationships at Nevermore.

While a series about a young girl with powers having a gothic family sounds an awful lot like The Chilling Adventures of Sabrina, the inclusion of Burton gives me the feeling that the show is going to be a bit less Satan-worship-y and be more family friendly.

Besides Ortega, the show also includes Luis Guzman and Catherine Zeta-Jones in the roles of Gomez and Morticia Adams. Even the original Wednesday Addams, Christina Ricci, has been cast in a role, but we don’t know who she’s playing yet. I have a feeling though, that she’s going to be an adult Wednesday narrating her experiences as an adolescent.

Until we get a better look, all we can really do is guess.

No specific release date has been announced for Wednesday, but the show is likely to premiere on Netflix sometime this year… possibly Halloween.