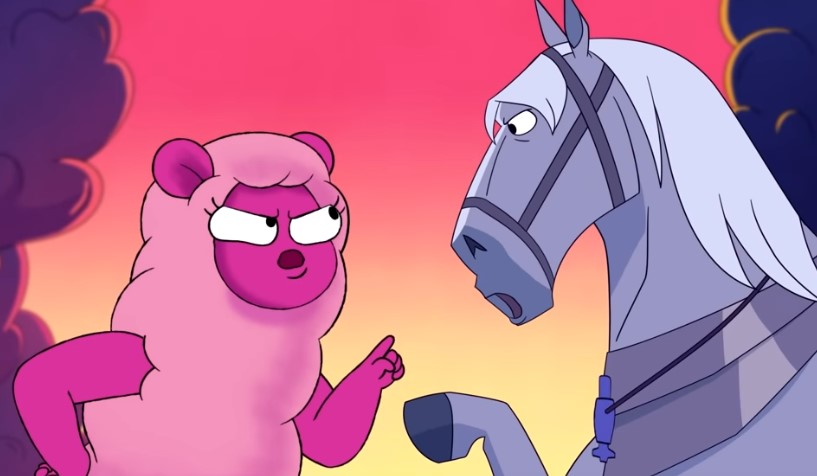 Ever since Adventure Time came out on Cartoon Network, chilren’s cartoons have been going to increasingly weird (and sometimes dark) places, and with Netflix dropping their new trailer for Centaurworld, it looks like the show is going to be headed in that direction.

Watch the trailer for Centaurworld down here:

Centaurworld follows a war horse who is transported from her embattled world to a strange land inhabited by silly, singing centaurs of all species, shapes, and sizes. Desperate to return home, she befriends a group of these magical creatures and embarks on a journey that will test her more than any battle she’s ever faced before.

The series comes from first-time showrunner Megan Nicole Dong who is co-executive producing with Star vs. The Forces of Evil’s Dominic Bisignano. The main Horse will be voiced by Kimiko Glenn with other cast members including Jessie Mueller, Megan Hilty, Parvesh Cheena, Chris Diamantopoulos, and Josh Radnor.

Disney fans will also love recognize the voice of Lea Salonga, who will be providing some of the musical numbers in the series.

Though the show looks like it mostly takes place in a colorful fantasy world, there are some clips that come back to the war-torn universe that the main horse character is from—and I’m expecting things to take a darker tone as the series progresses.

The animation is actually topnotch, and you can compare it to the likes of Netflix’s Midnight Gospel. We don’t know exactly what to expect with this show, but I’m already eager to see what’s in store for this kooky-looking show.

Centaurworld premieres on Netflix on July 30.