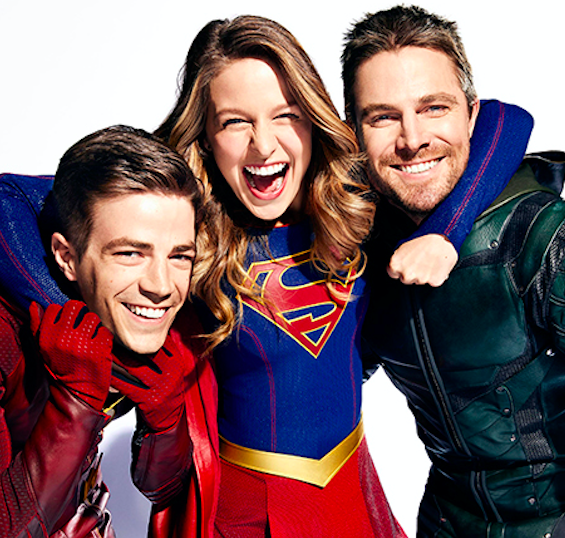 We’re mere weeks away from the moment when Supergirl meets the rest of the gang. Exciting, right? Arrowverse producers and cast have been tight-lipped about exactly what that week will entail. And it’s a good thing, too. Arrow’s episode of the crossover will mark the show’s 100th episode, and plenty fan-favorites will return. Aside from that news and the announcement of the Dominators, fans have been left in the dark. Now we’re getting our first official look at what’s to come. Check out images from the crossover below (via Entertainment Weekly).

Before going any further, let’s acknowledge how awesome it’s going to be to see Cisco finally meeting Supergirl. The first image of her episode looks pretty tame. But Barry seems to be introducing him to Kara Danvers first. It’s probably best to save the flying alien bit for last. Apparently, Barry and Cisco travel to Kara’s Earth asking for help, near the end of Supergirl episode seven. The following night will truly kick off the crossover proper with The Flash’s eighth episode of the season.

That brings us to the second image, where we see Flash and Green Arrow in cover behind a building. Diggle, or Spartan, seems to be cautiously approaching. Either the duo isn’t aware of Diggle’s presence, or something pretty sinister is taking shape unbeknownst to us.

The third photo is a touching one, as we see the Canary Sisters together for the first time since Constantine helped cure Sara’s resurrection mania. This image doesn’t tease too much of what’s happening in Arrow’s 100th, but it’s still a great shot.

Last, but not least, is a still from Legends of Tomorrow’s crossover episode. Here we see the whole team together, giving us an unprecedented look at television history in the making. Plus, Steel is wearing a costume! Is this something he’ll get in Legends prior to the crossover, or is this a Cisco original?

Below are images from the Entertainment Weekly exclusive photoshoot.

Images: The CW via Entertainment Weekly