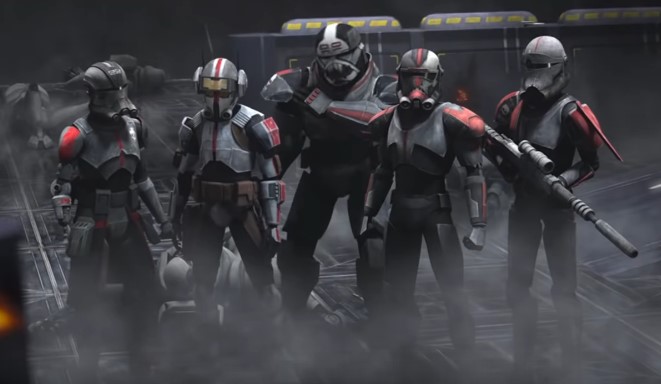 After the successful finale of The Clone Wars on Disney+, Lucasfilm was given the greenlight to make the spinoff series focused on Clone Force 99 called Star Wars: The Bad Batch. The animated series is set to debut on Star Wars Day May 4, and we have an all-new teaser giving us a look at the show.

“Star Wars: The Bad Batch” follows the elite and experimental clones of the Bad Batch (first introduced in “The Clone Wars”) as they find their way in a rapidly changing galaxy in the immediate aftermath of the Clone War. Members of Bad Batch—a unique squad of clones who vary genetically from their brothers in the Clone Army—each possess a singular exceptional skill that makes them extraordinarily effective soldiers and a formidable crew.

The show is being executive produced by Clone Wars creator Dave Filoni and will feature the return of ‘enhanced’ clones Hunter, Tech, Crosshair, Wrecker, and Echo. Despite the return of the squad from The Clone Wars, the trailer has also revealed the appearance of other characters including Fennec Shand, Captain Rex, Saw Gerrera, and Moff Tarkin.

Though the clash between the Light Side and the Dark has always been at the center of Star Wars, there are some fans who love the stories of the more ‘ordinary’ members of the galaxy like the clones, soldiers, or smugglers. While the Bad Batch is far from ordinary, it’s great that we’re getting stories on these ‘smaller’ characters in the franchise.

Catch Star Wars: The Bad Batch when it holds its special 70-minute Disney+ premiere on May 24.