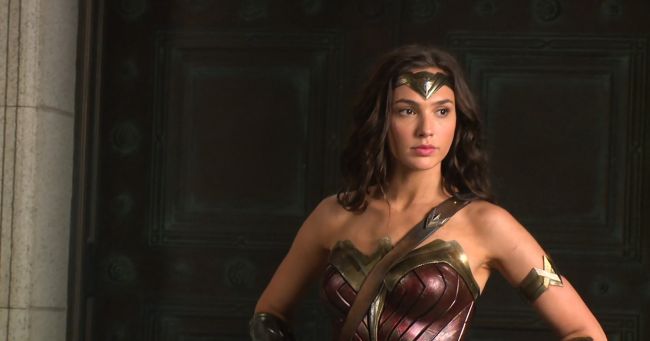 Batman v Superman has launched digitally, a physical release hits stores July 19, and with it comes a bevy of special features. Included in the special features is a behind-the-scenes look at Wonder Woman on set. Some fans may have to wait for a copy, but thanks to Twitter user @nighthawkj2 the following pair of stills have emerged.

No, there isn’t any context as to what’s going on the scene, or why it wasn’t in the film. However, these two images, and the ones below, do offer another look at Wonder Woman’s suit.

The following stills are courtesy of Cosmic Book News and give an even closer look at the suit.

This is great, but fingers are crossed that more is unveiled about her solo film soon. Gal Gadot has spoken at length about the differences between BvS Wonder Woman and the character in the solo. With San Diego Comic-Con just around the corner, perhaps more information will be revealed in that regard.

Wonder Woman opens in theaters on June 2, 2017. The character will grace screens once more later next year on November 17 in Justice League.