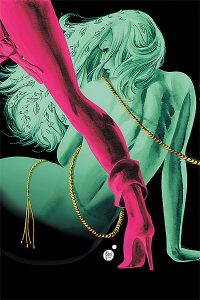 This is an obvious one; since the announcement of this movie’s initial stages of production we knew the team would consist of the same characters portrayed in the comic book of the same name. Margot Robbie’s Harley Quinn will be lead character, since Suicide Squad introduced her to the DCEU already. There’s rumors about Megan Fox portraying the sometimes best friend, sometimes love interest to Harley, Poison Ivy. Then there’s the ever so tricky casting of Catwoman, because in this universe she’d be an experienced cat burglar with a likely long history with Batfleck — something not fitting to Anne Hathaway’s portrayal of Selina Kyle. Can Tessa Thompson be both Valkyrie and Catwoman? No? Oh…

These three women would follow the new “sympathetic villain” trope, by showing us Gotham’s female antagonists get their way and (hopefully and) successfully makes us root for them by the end credits. While Margot Robbie did an excellent job as our favorite Joker minion, the success of this film will depend on how likable the ensemble’s interaction is rather than just some eye-candy femme fatales kicking butt. (Yes, that was a jab a Sucker Punch.)