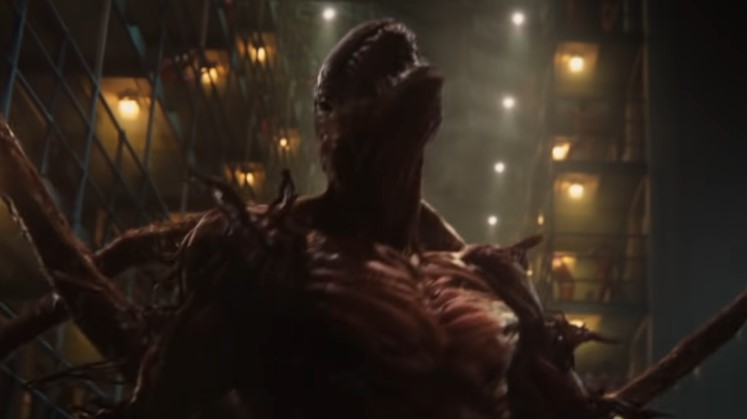 Venom: Let There be Carnage is set to come out in October, and Sony is on the final marketing push to get everyone to watch the movie on the big screen. Thanks to PlayStation, we have an exclusive clip of Cletus Kasady (Woody Harrelson) going all out as Carnage.

Watch the new clip for Carnage down here:

While some say that the clip gives away way too much, Carnage’s escape and transformation is kind of expected, so it’s not really any large twist of the plot.

With Venom being so visually unique when the first movie came out, Carnage is also an entirely new animal. Besides being more vicious, you can see that it merges with Kasady a lot more solidly, and the symbiote can no longer be treated like some kind of “suit” like with Eddie Brock and his symbiote.

If I had any gripes, I think I wanted Carnage to be a mesh of black and red like in the comics. Here they seem to want a creature that looks like a human body inside out, but then he ends up looking visually similar to the Mind Flayer from the third season of Stranger Things. Then again, that’s just my opinion.

Tom Hardy returns to the big screen as the lethal protector Venom, one of MARVEL’s greatest and most complex characters. Directed by Andy Serkis, the film also stars Michelle Williams, Naomie Harris and Woody Harrelson, in the role of the villain Cletus Kasady/Carnage.

Catch Venom: Let There be Carnage when it hits theaters on Oct. 1.