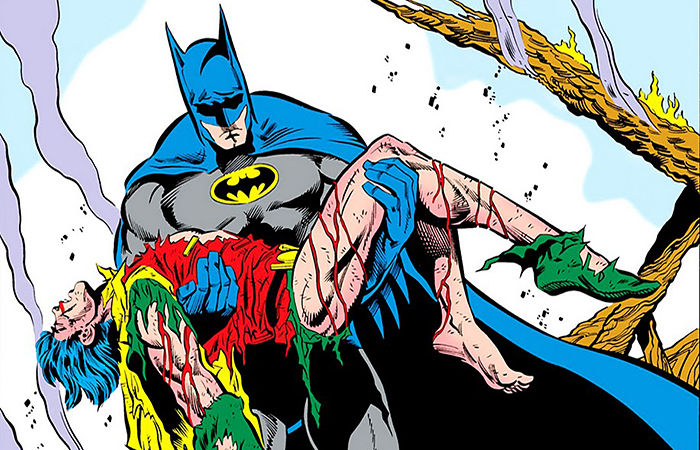 Update (5-23-16): For unknown, but obvious, reasons, the Facebook video with the Jason Todd mention has been removed. However, you can still read the comment made by the guide during the tour of the DC Universe Exhibit. The quote was as follows:

“This was one of the big things from Batman v Superman, right across this way. The Jason Todd Robin suit. Spray painted on the front ‘Ha ha. The joke’s on you Batman’. Those of you that know the storyline, know what happened to this Robin,” John explained.

Original Story: Hint after hint has been tossed around that points towards the dead Robin suit in Batman v Superman belonging to none other than the second Robin, Jason Todd. In the comics, the hero was brutally murdered by the Clown Prince of Crime and presumed dead for many years. Since the reveal of a dead Robin in the DCEU, Warner Bros. and Zack Snyder have remained mum on the sidekick’s identity, despite the wild fan theories that continue to gain traction.

Now it would seem the studio has, perhaps inadvertently, revealed the fallen hero’s identity and confirmed his origin is at least similar to the Death in the Family story arc from the 80s. Check out the video below which features a sneak peek of the DC Universe Exhibit. Talk of Jason Todd/Robin begins at the 1:33 timestamp.

Truthfully, this isn’t too surprising, as stated above, the identity has been hinted at continuously. What this does is add to the speculation that we could potentially be getting at least a taste of the Red Hood in a solo Batman film. It’s rumored to be packed with villains, and the duo of Geoff Johns and Ben Affleck helming the project is reportedly looking to try something different by telling the “ultimate Batman story.” You can’t get much more different than a resurrected adopted son, returning home to violently dismantle his city’s criminal underbelly.

This awesome new tidbit also ups the anticipation of seeing Batman and Joker interact on the big screen for the first time with a post-dead Robin storyline. Whatever happens next in the DCEU, the Batman stories are sure to be some of the most gratifying. Unfortunately, we’ll have a long time to wait before we can see it through. While a Batman standalone film has been confirmed, a release date has yet to be set.

As the excitement continues to build, so too will speculation regarding the next step in building the cinematic universe’s Justice League. Leave us your thoughts and theories in the comments below.