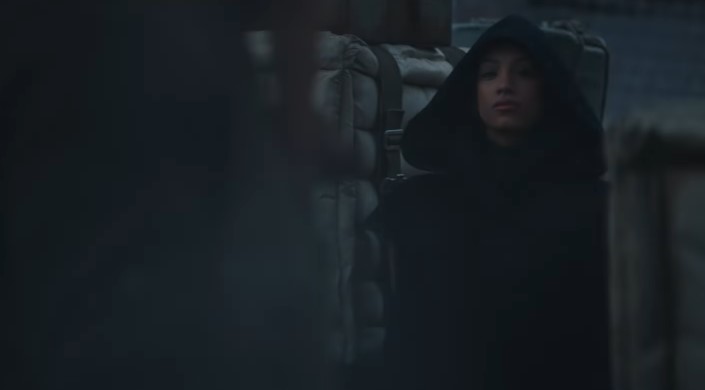 While a lot of people have been speculating online about when the trailer for The Mandalorian Season 2 will drop, Lucasfilm just seems to have released it out of nowhere. Now fans are poring over every new thing in the trailer, and one character that seems to be the center of discussion is the one played by WWE superstar Sasha Banks.

What’s interesting is, the shot of Banks comes when the voiceover mentions the word “Jedi.” The full quote goes, “The songs of eons past tell of battles between Mandalore the Great and order of sorcerers called Jedi.”

While some would like to think that Banks is playing some secret Jedi, I’m inclined to put more meaning in the word ‘sorcerer.’ In The Clone Wars, we’re introduced to the Nightsisters of Dathomir, a group of women who use “Shadow Magic” which is said to be connected to the Dark Side of the Force. It’s likely that Banks could be playing a Nightsister, seeing as Baby Yoda seems to be hunted down for his prowess in the Force.

One other fan theory going around online is that Banks is playing the part of Sabine Wren from Star Wars Rebels. Sabine is rumoured to be coming into the show along with Ahsoka, and she herself is a Mandalorian, even wielding the Darksaber that Moff Gideon holds now. What are the odds that Sabine is tracking down the Mando to help him keep Baby Yoda safe? This is also probably not connected, but Banks’ wrestling persona dons brightly colored hair–a noticeable character trait for Sabine.

As fans, all we can really do is guess. Hopefully Lucasfilm will drop another trailer in October giving us a look at more things. For now, catch The Mandalorian Season 2 on Disney+ this coming Oct. 30.