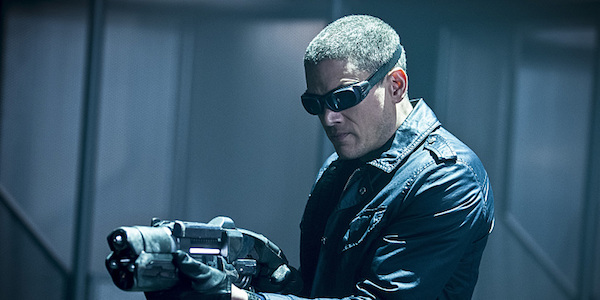 It looks like one of Arrowverse’s favorite baddies is about to have a cold exit!

Wentworth Miller‘s multi-year, multi-show run as the Arrowverse’s Leonard Snart aka Captain Cold is coming to an end.

The Flash and Legends of Tomorrow actor recently shared on Instagram “Currently shooting some of my final episodes.”

“I’ve had a tremendous time playing this character,” he added. “It’s been an opportunity, an education, and a f-cking blast.

Miller’s implied exit comes weeks after it was reported that Victor Garber, who plays Martin Stein/half of Firestorm, is ending his run as a Legends original cast member.

Captain Cold first warmed up to the iconic DC Comics Role in the fourth ever episode of The Flash. What made the role was so great is he was paired up with his Prison Break costar Dominic Purcell (Micky Rory/Heat Wave) those two will always make a great team which is most likely why Fox revived the Prison Break thriller.

Both Miller and Purcell were enlisted to help populate The CW’s next Arrowverse offshoot, DC’s Legends of Tomorrow, though Miller bowed out as a series regular after Season 1. Miller then segued into the first-ever instance of an actor being a series regular across theoretically the entire superhero slate exec-produced by Greg Berlanti. But as of this TV season, he is merely recurring on Legends.

Be sure to check out Legends of Tomorrow on The CW Tuesdays at 9 PM and leave your thoughts on Captain Cold’s exit below.